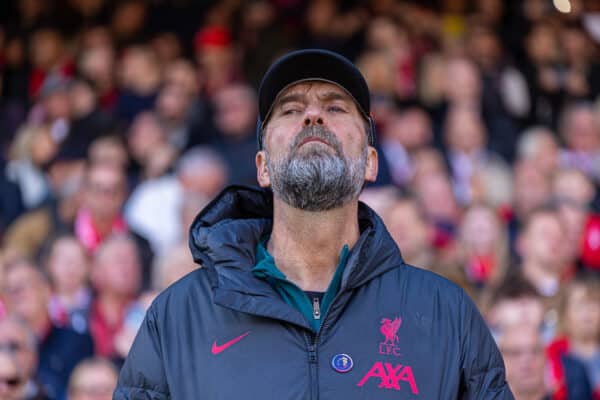 Jurgen Klopp believes Liverpool “had to win” against Nottingham Forest given the clear cut chances they had throughout the game, after his side fell to a 1-0 defeat at the City Ground.

Ex-Reds striker Taiwo Awoniyi scored the only goal of the game in the second half, but although Liverpool were far from their best once again, they had more than enough chances to win the game.

Virgil van Dijk, in particular, had three big opportunities from set pieces, with missed chances coming back to bite Liverpool later in the game.

Speaking after the game, Klopp accepted that his team weren’t at their best, but was disappointed that his players didn’t take the opportunities they had to get something out of the game.

“The performance I can kind of explain, the result not, to be honest, because I never saw a game where a team has four or five no-brainers from a set piece. We had to finish them off,” Klopp told BT Sport.

“The way they defend, we were perfectly prepared for that, we always had a free player. Bobby first half, Virgil I think two or three times, they have to put the game to bed, to be 100 percent honest, because the goal we concede is a big mistake from us.

“We lose the ball and give them the free-kick. Apart from that, all the other chances they had in the first half we gave them, because we played just too often the wrong passes in the centre. We didn’t want to do that but it happened anyway.

“Always when we used the wing they were open, because they closed the centre. Underlaps were possible on the wing, crosses, passes, everything was possible from there.

“But that it would not be a free-flowing performance was pretty clear before the game, we had to make real late changes and in general a lot of changes, and then it’s a game you have to win by purely doing the right stuff again and again. Obviously, we didn’t, and that’s why we stand here and we’ve lost the game.”

Van Dijk’s best opportunity fell his way in stoppage time, when he found himself completely unmarked in the box, only for Forest goalkeeper to deny him with an excellent save.

Klopp was happy to give Forest praise for their spirited performance, but clearly felt Liverpool’s defeat was all their own doing.

“It’s the Premier League, they’re all good and they all fight, but giving a team six clear cut chances after set pieces, I’m not sure I should give them praise to be honest.

“They’re a great team, Steve is a fantastic manager, but for us today, we have to win here, done, but we didn’t so credit to Nottingham.