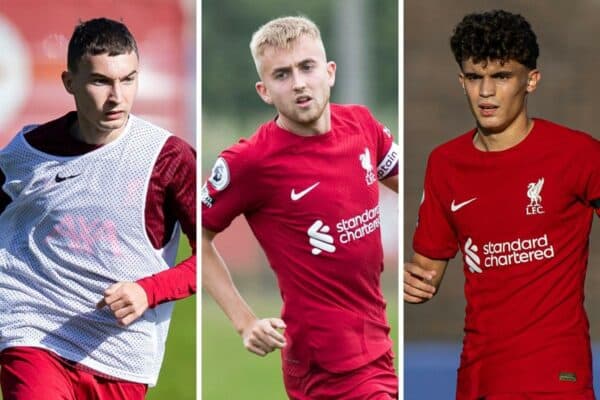 Friday saw Liverpool take in preparations for their clash with Man City, with some players involved in second-day recovery, leading to six youth call-ups.

The Reds host their long-time rivals on Sunday in the Premier League, on the back of a 7-1 thrashing of Rangers which will hopefully boost confidence.

A trip to Glasgow on Wednesday has led to a cautious approach in the buildup, with Jurgen Klopp telling reporters in his pre-match press conference that “we still have to figure out who is available.”

Little can be read into the photographs emerging from Friday’s session, then, though there was no sign of Ibrahima Konate.

The Frenchman was brought off after 79 minutes at Ibrox, and with that being his first start of the season it is likely that he was taking in second-day recovery elsewhere.

No Konate pictured in LFC training today. But then, Thiago wasn't last Friday ahead of Arsenal. Hopefully just a precaution after his return from injury. But Klopp was very coy / alluding to injuries in presser.

Trent Alexander-Arnold, Luis Diaz, Joel Matip, Naby Keita and Arthur all remain absent, while Calvin Ramsay also appears to be out, with a group of youngsters brought in to flesh out the group.

Norris, 19, Cain, 21, and Stewart, 20, are among the oldest players in the academy ranks, so it makes sense that they would be called upon to work with the senior squad.

Musialowski will turn 19 on Sunday, though his presence was more surprising given he has rarely featured for the under-21s so far this season, only returning to the fold in the past fortnight.

The sight of Alex Oxlade-Chamberlain, who was also pictured training the day before the win over Rangers, is a major positive.

While Liverpool’s medical staff will urge patience with the midfielder, he is seemingly close to returning to availability after three months out with a hamstring issue.

Beyond Konate, there were no other surprises in terms of players not spotted, with the likes of Andy Robertson, Joe Gomez, Diogo Jota, Thiago and Curtis Jones all training.