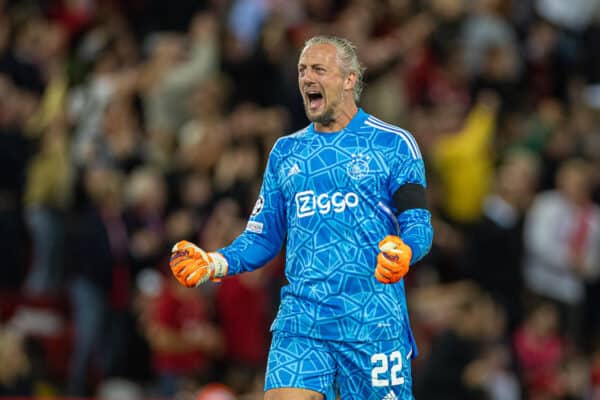 While Liverpool swallowed the now all-too-familiar taste of defeat, Ajax continued to flex their goalscoring prowess in the Eredivisie with a 4-1 victory.

On the same day that Jurgen Klopp oversaw his side’s defeat at Nottingham Forest, the fourth of the season to date, Alfred Schreuder had four reasons to celebrate.

The Dutch side were on the road at RKC Waalwijk on Saturday evening, league leaders against a mid-table out who are now separated by 14 points at the 11-game mark.

Schreuder named a strong XI for the occasion, with the likes of Daley Blind, Jurrien Timber, Edson Alvarez, Steven Bergwijn and Brian Brobbey all named in the starting lineup.

A luxury Klopp was not quite afforded at Forest thanks to injury, and even an ear infection when it came to Thiago.

And it was Brobbey that put the exclamation mark on Ajax’s victory with a brace in the space of 19 second-half minutes, snuffing out any late hope RKC Waalwijk may have had.

Steven Berghuis scored the opener for Ajax inside 22 minutes but the hosts had got back on level terms by the time the break came around, but that was all the joy they would have.

Berghuis added another goal in the 53rd minute as Ajax capitalised on chaos in the penalty area, sustaining their pressure before the Dutchman hit truly with a sumptuous first-time strike.

It was then Brobbey’s time to show off his assets, first rolling off his marker and sliding the ball between the goalkeeper’s legs before making a run between two defenders and finishing from a tight angle.

Three goals in 28 minutes, the result beyond Waalwijk in a hurry as Ajax stretched their lead over PSV at the top of Eredivisie to four points.

The result is Ajax’s third league win in a row, with Napoli the only team to inflict defeat during that run thanks to a 4-2 scoreline, leaving their knockout hopes hanging by a thread.

Liverpool need just a single point on Wednesday to secure their place in the last 16 and all but consign Ajax to the Europa League, leaving plenty to fight for.