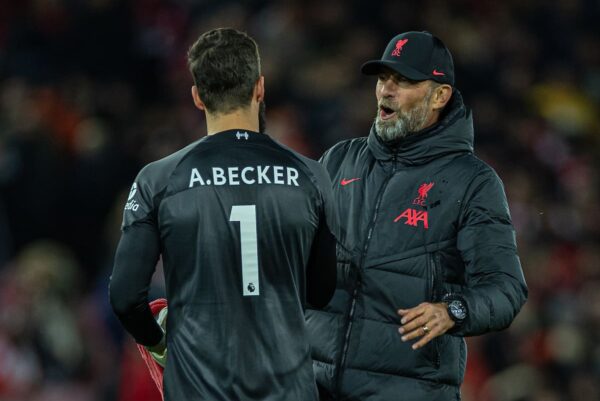 Liverpool made it consecutive 1-0 home wins for the first time since December 2018, as Darwin Nunez‘s header saw us beat West Ham, albeit in very nervy fashion in the end.

The right to rotate

Jurgen Klopp went pretty big with his calls to swap around the team following a magnificent but tiring win over Man City.

Jota was enforced, but Robbo, Fabinho, Elliott and Milner were all taken out with Trent, Tsimikas, Carvalho, Henderson and Nunez those brought in. A welcome return to the squad for Alex Oxlade-Chamberlain meant the bench was boosted somewhat.

While the most important thing right now for Liverpool is to find consistency, and for that we usually want a regular line-up, it’s impossible to ignore two things.

One is that this isn’t exactly a fully functioning first team right now, given so many injuries and a few out of form, and the second point is that the games are simply too regular, too relentles right now to just play a familiar 11.

It will be a case of mix-and-match of the very most important and a few squad options for a little while, and with Forest to come at the weekend – the league’s weakest side so far this term – expect more rotations to come.

Regardless of the eventual outcome it’s hard to argue Klopp made a questionable call with his team selection and if anything, more squad players being involved instead of guaranteed starters should mean competition for places is fierce and those who are sometimes on the fringes are pushed to play to their maximum level for increased game time.

Three subs before the hour mark attests to the same reasoning and, on that note, it was good to see Curtis Jones come on for his first meaningful minutes this season.

Deadly Darwin shows his worth

We first saw him race onto the ball and blast it left-footed on the half-volley, a lovely looping effort which was tipped over. He also had a ferocious drive with his left, saved, and a thunderous chest-and-half-volley which was almost a goal of the month contender – only for it to rattle out off the post.

Arguably a better chance was the rebound, which he scuffed wide.

The goal itself was a really good header, fine movement between two centre-backs to make the most of Kostas’ great cross.

But aside from the efforts on goal was a whole lot of work rate, channel running, chasing back, giving poor Ben Johnson nightmares to rob him and stop him playing out, even tackling back in the left-back zone. A brilliant half.

Less than an hour but his first Anfield Premier League goal, a lot of applause from the Kop and certainly more game time to come on the basis of this display.

Player of the half-year

Whatever happens across the coming five weeks or so, Alisson Becker has been Liverpool’s best and most important player across the first 50 percent of the campaign.

While the Reds were at their most desperate and cut apart early in the season, he was one of only two or three who held their level and consistency, regularly coming to our rescue to either keep us in games or keep the score less embarrassing.

At the weekend his proactiveness was on show, claiming an assist, while here his footwork actually started very sloppy – but his handiwork was far more important.

A magnificent penalty save from Jarrod Bowen kept us ahead at the interval and even if this wasn’t his most outrageously elite showing of the season, he played a crucial part in the win.

In the search for points, performances and consistent results, it’s extremely helpful to first of all shut out the opposition.

Liverpool have two clean sheets in two home league games over the last few days, but let’s be clear: they were achieved in very different ways.

Last time out we were structured, deliberate, brilliantly cohesive against Man City.

This time against West Ham it was too often ragged, last-ditch, fitful or causing our own problems, with Ali’s penalty save and James Milner‘s late superb block both to thank for the shut-out.

We will take it. You have to win all types of games, that’s a fact, and sometimes not being at your best and still winning is vital.

But similarly, let’s not pretend this is formidable Liverpool back to their best – last time might have been exceptional but this time we were fortunate at one end and wasteful at the other.

Now, the even harder bit.

It’s two wins in a row in the league, and at the weekend against Forest we have the chance to win three in a row for the first time this term.

On a wider lens view, it’s three straight wins and four in five across all competitions.

As Klopp has said, confidence and rhythm has to come back bit by bit, game by game, win by win.

It is absolutely imperative therefore that we didn’t waste that big weekend showing tonight, and continue to not do so at the weekend.

A couple of very tough games down, six points earned and a more healthy-looking league table placement is the result. Do it again.