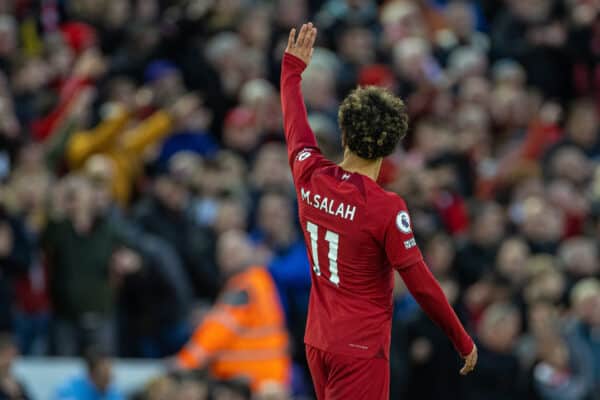 Liverpool were sensational in their 1-0 win over Man City, with immense individual and collective performances on show at a feral Anfield at its best.

Mohamed Salah is one of Liverpool’s greatest players of all time, but he has been used poorly and looked lost at times this season.

His record-breaking hat-trick against Rangers was a hugely promising sign that he had refound his mojo, though – now, I think we can confirm he has!

Salah was superb against City, looking up for the battle immediately and running the visitors’ defence ragged with his pace and power.

While the Egyptian King missed a gilt-edged opportunity at 0-0, he soon made up for it with his latest iconic moment at Anfield.

His swivel and first touch made mincemeat of Joao Cancelo, before racing through and burying an unnerving finish into the Kop net to secure all three points.

Salah is the ultimate big-game player and his contribution here summed up his greatness.

So, who else still can’t breathe?

The Reds were massive underdogs going into Sunday’s game, having struggled for form all season and coming up against arguably the world’s best team in City.

Liverpool were imperious from the first minute until the last, however, on what ended up being one of the most unforgettable games of the Jurgen Klopp era.

There was controversy, drama and an unbelievable level of football on show – it’s hard to think of a better Premier League match in years.

Liverpool’s tag as “Mentality Monsters” has been rightly questioned in recent months, but that came to the fore in emphatic fashion here.

If the 7-1 win over Rangers suggested the Reds are on the mend, this was proof that they are far from being done this season.

Trio rise to the occasion

There were some eyebrows raised when the starting lineups were announced, with James Milner the most noticeable starter.

The veteran was deployed at right-back, such was the need to play Joe Gomez at centre-back, while Harvey Elliott was also preferred to Jordan Henderson.

All three shone brightly for Liverpool, though, with Milner’s display one that highlighted his fight and dedication, as he battled bravely and got the better of the horribly dangerous Phil Foden.

Meanwhile, Gomez was handed Sky’s Man of the Match award and was almost perfect, barring switching off for one Erling Haaland chance.

After so many injury setbacks and struggles for playing time, it was heartwarming to see the 25-year-old as one of the standout heroes on the day.

At 19, Elliott is also worthy of special praise, more than holding his own in a game that featured many world-class players around him.

He offered the attacking thrust that Henderson has lacked all season and he also showed improved defensive discipline, silencing those who doubt his off-the-ball skills.

Van Dijk back to his best

It’s fair to say that Virgil van Dijk has been well short of his all-conquering best this season and he faced his biggest task of 2022/23 on Sunday.

The Dutchman came up against the brutish Haaland at Anfield and he produced his best showing of the campaign to date, by some distance.

Van Dijk was his old dominant self, winning headers, pressing boldly and bringing calm to the back-line, holding it together in the dying minutes.

One absolutely vital headed clearance under his own goal was the 31-year-old’s best moment, his words on the moment after the match showcased the attitude we’ve all come to know.

“Apparently, that’s what defenders have to do.”

He was a colossus throughout and, on this evidence, rumours of Van Dijk’s demise have been greatly exaggerated.

This is still Anfield

The Anfield atmosphere has felt lacking of late, not helped by Liverpool’s form, but come the final whistle, you could have heard it from space!

The Reds’ stadium was rocking during the second half and Pep Guardiola foolishly ignited it with his usual bizarre Anfield antics.

When Phil Foden’s goal was ruled out by VAR, the City manager turned to the Main Stand and shouted “This Is Anfield”, referring to decisions going in the hosts’ favour at home.

SCENES! All of them.
Properly wild few minutes of football, including Pep Guardiola whipping up the home crowd saying 'This is Anfield' following the decision to disallow Phil Foden's goal.

Like Mikel Arteta last season, that moment immediately made City’s task harder, with the supporters fervent, especially when each of Anthony Taylor’s woeful decisions were made.

This was the Anfield that we all know and love – it might be unfair to expect this level of noise too often, but it acts as a reminder of just how influential it is.