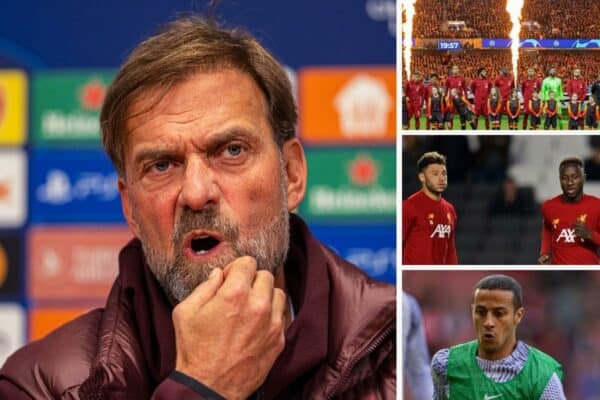 Jurgen Klopp was in a short and almost preoccupied head space when he fronted the media on Tuesday evening, looking ahead to Liverpool’s clash at Ajax.

Here are four key points from the manager ahead of Wednesday’s match:

Who is available, who is not?

It’s been a rotating door policy in the medical room for Liverpool this season and, unfortunately, that has not changed.

There is good news where the squad is concerned at Ajax – but that too comes at the cost of Thiago thanks to his ear infection.

Here’s what Klopp had to say about three of his senior players:

Perhaps Darwin Nunez to start and Konate to get some minutes off the bench.

“Everybody told me they’d be out longer”

Neither Alex Oxlade-Chamberlain nor Naby Keita were named in Liverpool’s 24-man group stage squad back in September, with both on the comeback from serious injuries.

However, with two games to go both are back in training. And while the manager does not want to rush any players back into his team, he’s not particularly pleased with not even having the option.

“Same with Naby and Ox [not to bring them in straight away], they need to train,” Klopp explained.

“They both aren’t in the Champions League squad anyways because everybody told me they would be out for longer.

“Good – not back to play but back to be around and play a few minutes.”

Not great, is it?

“Makes sense to be optimistic”

The search for consistency is ongoing and it is not lost on the coaches or the players, but the fix isn’t going to magically appear.

That does not mean Klopp is not “optimistic” about his side’s fortunes – and there’s no need to be anything else, is there? Negativity gets you nowhere.

“Do I expect us to play better consistently? Yes. Am I ready to make the necessary steps to get there? Yes,” Klopp said of the Reds’ current form.

“Very good performances on a consistent level don’t fall off the trees, you have to work for it and you have to go for it in the long-term and that’s what we are doing.

“We are working and trying to turn each screw and will do that without being nervous or thinking something is going against us.

“I think it makes sense to be optimistic and that’s what I am.”

Liverpool need to avoid defeat at Ajax to guarantee their place in the last 16 and Klopp is under no illusions that they will just be handed what they desire.

Ajax, who have scored 11 goals across their last two games, will ask plenty of questions.

“It would be absolutely great, but I cannot sit here and tell you I feel it already as if we would be halfway through,” Klopp said.

“There is a game and 95 minutes in between – and if it happens then I can tell you it was really big and really important, but in this moment we just prepare for the game.

“After our start in the group stage, it was not that people thought it was likely this can happen, but it happened and now we have to try to close it for us, the group, and that’s what we’re here for.”

For once Liverpool, please do it the ‘easy’ way!