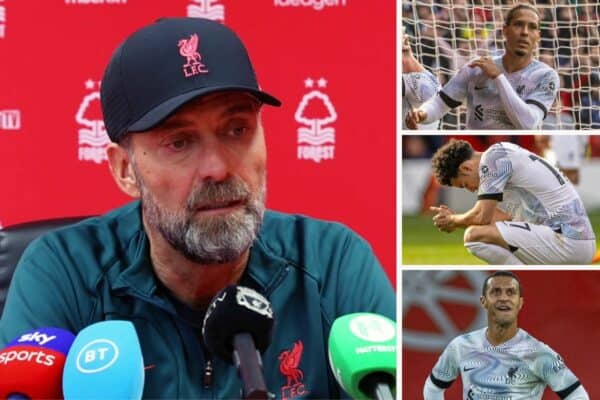 Jurgen Klopp discussed Liverpool’s dreadful away record, a possible lack of creativity from open play, and Thiago‘s freak ear infection after the Reds were beaten 1-0 by Nottingham Forest on Saturday.

Here are four key points from the boss after the Reds fell to defeat at the City Ground:

“Decided in 6 or 7 situations”

This result was all Liverpool’s own doing.

They weren’t at their best, but to be honest, given their injury situation and intense schedule, nobody expected them to be. Nonetheless, they still had more than enough chances to win this game.

“I think this game was decided in six or seven situations, one was the set-piece they used and the other situations with the set-pieces we didn’t use,” Klopp said.

“That it will be a difficult game for us was clear. Away, Nottingham not in a great situation and [a] super-intense week for us, two super-intense games, [we] had to change late, so it was clear that we have to be ready to put a big fight in. The boys did.

“But how we cannot score from the set-pieces, I have no idea.”

Away form not a concern

Liverpool are still yet to win an away game in the Premier League this season.

That, for a side who were two games away from winning every trophy available to them in the last campaign, is quite something.

Klopp, though, doesn’t think their away record is a particular problem.

“You cannot compare these games,” he told reporters.

“That it’s better for us to play at home, that’s pretty much always the case but I think in normal circumstances we should have won this game today and then we talk differently.

“But we didn’t, you’re right, but I don’t think that it has anything to do with that we played here away or whatever.”

Nor is creativity from open play…

As Klopp says, Liverpool had plenty of opportunities to win this game, but should we be worried that pretty much all of those were from set pieces?

“No, not really,” the manager claimed.

“So they defended with pretty much everybody they had and we had to play better. Actually, first half, the problem was all the chances they had or moments they had we set them up by the wrong passes through the centre, it makes no sense – they had nine players there.

“You cannot control the ball there, that’s not possible, so that’s when they had their moments.”

The last thing Liverpool needed given their current injury situation?

A freak ear injury to their best midfielder hours before their latest match.

“So, as I said, Thiago got a bad ear infection last night and there was no chance for him to do anything. We drove him home.

“The decision was [made] in the moment he woke up and had the pain. The doctor went there and they tried everything, went to the hospital and stuff like this. It didn’t work out.”