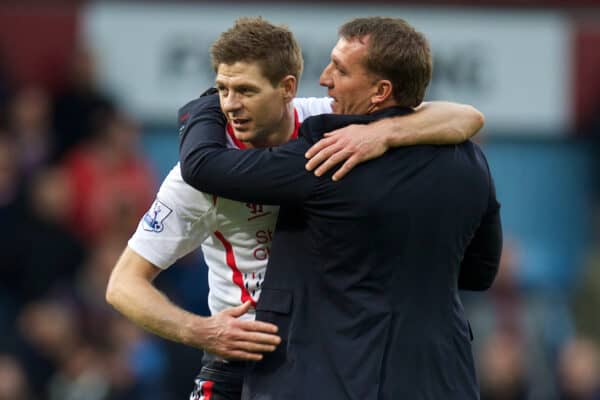 Brendan Rodgers was left “bitterly disappointed” by the dismissal of his former player Steven Gerrard at Aston Villa, believing he needed more time.

Gerrard and Rodgers worked together for three years at Liverpool, as captain and manager, before becoming adversaries in the dugout in Scotland and England.

The pair traded victories in the Old Firm in 2018, before two meetings in the Premier League last term which saw Gerrard go unbeaten, with a win and a draw for Villa against Leicester.

But despite both managers facing scrutiny over their roles throughout the season so far, it is Gerrard who was dismissed on Thursday night.

Villa announced their decision to part ways with the 42-year-old in a brief statement following the 3-0 loss to Fulham, before an awkward ride back to the Midlands together on the team bus.

Brendan Rodgers believes that Gerrard was not given enough time or patience to succeed at Aston Villa ? pic.twitter.com/u90azMPxAH

Rodgers was in a position to discuss Gerrard’s sacking almost immediately, admitting he is “bitterly disappointed” by the news as he spoke in his post-match press conference on Thursday.

“I’m bitterly disappointed for Steven of course,” he said after Leicester‘s 2-0 win over Leeds.

“He did a fantastic job up at Rangers, got the opportunity to come to the Premier League and, of course, their ambitions there are to be, I assume, up in European football.

“But it just seems the way of it now, that every day a manager is losing his job or under threat to lose the job.

“I think stability and patience seems just to be running out now in football.

“So I’m really, really disappointed for him, because I believed, in time and with that patience, he could have got them to where he wanted them to be and where the club wanted them to go.

“I’m bitterly disappointed for him.”

It is unclear where Gerrard goes next, having spent less than a year in charge in his first job in the Premier League, but his status will undoubtedly lead to more opportunities.

Whether that is in the English top flight, or perhaps in the Championship or elsewhere in Europe, remains to be seen.