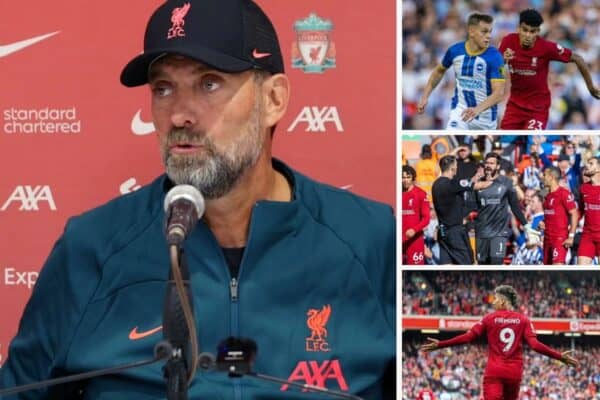 Jurgen Klopp spoke of both confidence and pressure after Liverpool fought themselves back into a winning position before relinquishing it late on in the 3-3 draw against Brighton.

Here are four key points from the manager as he spoke to the press following the draw:

A reminder of “heart attack” days

One of the biggest problems many fans are having with this current iteration of Liverpool is how starkly contrasting it is to the successful years that have just gone.

As Klopp pointed out, though, the performances of late bear strong similarities to his early days in charge.

“If you watch football games long enough here, we had these kind of situations years ago where we were only one goal up and it happened quite frequently that everyone nearly got a heart attack,” he said.

“We were just not convincing in these moments, where we then get a counter-attack, be compact, these kinds of things.

“That’s what reminded me of a little bit today.

“So I cannot say that I was 100 percent convinced that we would not concede a goal when we were 3-2 up.”

Another issue that has crept into Liverpool’s game is the ease in which they allow the opposition to slice through them and get sight of Alisson‘s goal – Brighton had six shots, all were on target.

There is a lack of confidence and conviction, irrespective of Liverpool’s position in the match, and against Brighton it made for “horrendous” viewing.

“They were really dangerous,” Klopp said.

“We had then much better moments and I think it was absolutely fine that we went 3-2 up, but then we were not sitting deep, we were not attacking high, we were somewhere in between, and that’s how they got their moments still.

“I don’t know how situations I saw today where the offensive players could just turn between the lines. Horrendous, really horrible to watch.”

Liverpool are “under pressure”

With just 10 points on the board, it’s no secret that the pressure is rising for Liverpool having proven to be a shadow of their former selves.

But this team now need to rediscover the art of relishing the pressure rather than crumbling under the weight of it.

“We’re under pressure. We don’t ignore it. It’s not that we increase it every day, but it’s there,” he said.

“We want to do much better, we want to have more points, we want to be in a different area in the table. That’s all clear.”

The talking needs to be done on the pitch, though.

There was a consistent message throughout Klopp’s press conference in that Liverpool need to “keep going” in order to solve their problems.

Whether the fixture list is a help or hindrance in that respect is up for debate, but the manager insists the work has already begun to prepare for the visit of Rangers in the Champions League.

“It’s a moment. We have to really, really keep going through together. That’s all I can say.

“We have to improve, that only happens if we perform. We have to perform more consistently. I cannot say what everyone wants to hear now, it’s just the reality.

“How I said, that process started already, interrupted by press conferences or interviews, but from tonight on, we will prepare for Rangers, then try to do better.”

That match is in only three days away.