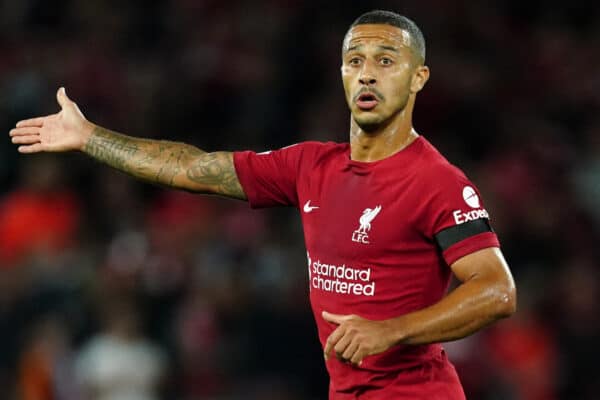 Confirmed Liverpool lineup vs. Leeds: Thiago returns as only change

Jurgen Klopp has made just one change as Liverpool take on Leeds just three days after their win over Ajax, with Thiago the only fresh face in the XI.

The Reds are back at Anfield following a trip to Amsterdam, buoyed by a 3-0 victory that booked their place in the last 16 of the Champions League.

Tonight’s task will be putting a 1-0 defeat at Nottingham Forest behind them and recapturing the battling form that earned back-to-back wins beforehand, with Klopp naming a strong side.

The likelihood is that it is a two-man midfield, as Thiago starts alongside Fabinho, with Harvey Elliott instead starting in a more advanced role.

If that is the case, Elliott will join Roberto Firmino, Mohamed Salah and Darwin Nunez in a four-pronged attack.

From the bench, Klopp has the likes of Jordan Henderson, Curtis Jones and Fabio Carvalho to turn to.