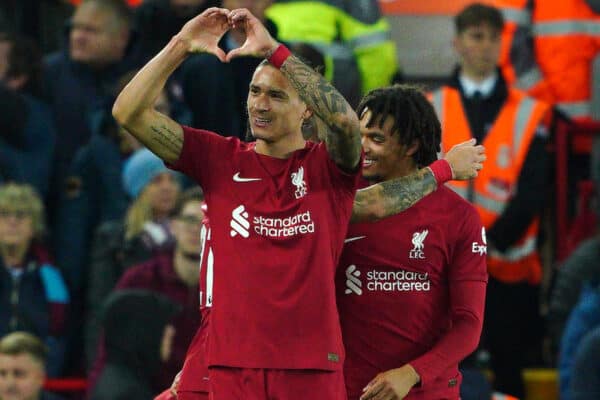 The Uruguay international’s goal in the 1-0 victory over West Ham was the third time in three starts he has found the net.

Nunez could have added to his tally in an impressive 57-minute appearance, having also hit the post, but his header from a left-wing cross is something Tsimikas hopes to be able to replicate regularly.

“It was a very good moment for me, especially because it was a cross for Darwin because I wanted to assist him,” the Greek, who was deputising for the rested Andy Robertson, told LiverpoolFC.com.

“Every day I work to make better crosses and to have better performances.

“I’m very happy for him because I know he wanted to score also. Hopefully he keeps his energy and his goal for the next games.

“He’s always there. He can score with the left, with the right, with the head – he’s a goal machine.

“He needs confidence, [which] is coming. I hope for him to score more and more goals to help the team to give us more wins because for us he is a very important player.”

Victory over West Ham made it back-to-back 1-0 wins to lift Jurgen Klopp’s side to within four points of the top four, with a trip to second-bottom Nottingham Forest to come at the weekend.

Sunday’s win over Manchester City felt a significant moment in what has been a stuttering season so far but Liverpool had to back it up to ensure they did not lose momentum.

“I think we are in good shape. We want to bounce back. We want to win football games. I think that’s the most important now,” Tsimikas added.

“Of course the previous game against Man City was a very important step for us.

“We have to keep going to see every game differently because we have to win all the games if we want to achieve our goals.”

Liverpool were once again indebted to goalkeeper Alisson Becker, who saved Jarrod Bowen’s penalty late in the first half and denied Tomas Soucek in the closing stages in a man-of-the-match performance.

The Brazil international has let in only seven goals from 13 penalties and has the lowest rate of conceding from the spot (54 percent) of any goalkeeper to face at least 10 in the Premier League.

“I’m really happy about that because we work so hard every day to come here and perform – sometimes things don’t happen just as we want but I think in the last few games it’s working out,” Alisson told Amazon Prime Video.