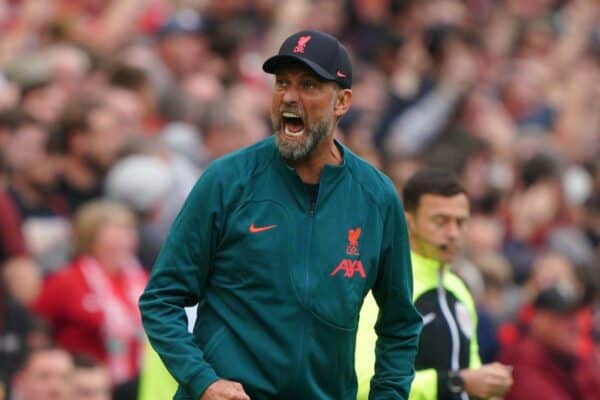 Jurgen Klopp knows all eyes are on Liverpool but the power to stop the scrutiny is in their hands, a set of circumstances that has the boss referencing his most famous line.

When the German arrived at Anfield in 2015, the Reds had won three, drawn three and lost two – a run of results that is not too dissimilar to the current tally of 10 points from eight games.

Seven years ago, Klopp said: “You have to change from a doubter to a believer. We have to start together new.”

The club is in a completely different shape from when Klopp first arrived but questions are being asked after a stuttering start to the season, something only Liverpool can change.

And it is that possibility of what can be that has the manager dusting off his famous saying, as football always presents a chance to turn the tide.

It’s a collective effort, from the players, coaches and fans and the visit of Man City is another chance to change the season’s trajectory.

“This will not be the first time that we have met City this season as we played against them in the FA Community Shield and that was another reminder of their quality – not that we needed it, of course,” Klopp penned in his programme notes for Sunday’s match.

“After that game, some pretty ridiculous questions were being asked about Pep, about his team and about Erling Haaland. Not by us, by the way. We knew.

“We knew how well we had had to play to beat them and we knew how good they were. So nothing they have done since then has surprised us in any way.

“They are a top team with an incredible manager and unbelievable players so it doesn’t take a lot of intelligence to work out that they will play brilliant football and get good results.

“For us, it has been different of course. Our path has been more difficult and this has meant the questions are being asked about us instead. This is OK. It is part of football and we have to deal with that.

“We might not like some of the questions and we might also think that some of them are unfair but the beauty of this team is that, individually and collectively, we have the potential to put things right so that the questions will stop.

“This is what I meant when I talked about turning doubters into believers all those years ago – in football you always have a chance to turn a not-so-good situation into a really good one. When this happens, everything makes more sense and everything feels better.

“But the starting point has to be working together, believing in one another and giving absolutely everything we have whether we are on the pitch, in the dugout or in the stands. This is especially true of this game.