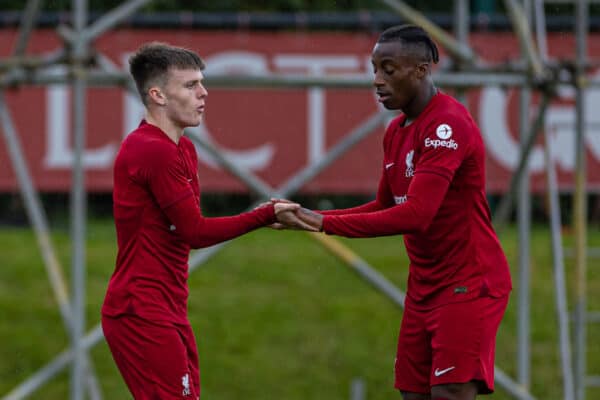 The Liverpool under-19s made it three wins from three in the UEFA Youth League, as they strolled to a 4-1 victory at home to Rangers on Tuesday.

As the torrential rain cleared slightly in Kirkby, the U19s sides from Liverpool and Rangers made their way out for a first-ever competitive meeting.

It was a particularly strong young Reds lineup, with the likes of Bobby Clark, Isaac Mabaya, Luke Chambers and Oakley Cannonier all starting, but it took time to gain any control.

When they did, they began to dominate, taking the lead in the 22nd minute as Dominic Corness’ whipped corner was headed down by Jarell Quansah and then in by Cannonier for his fifth goal in three games.

Cannonier almost grabbed another soon after, following a bizarre lapse from the Rangers goalkeeper, allowing the striker to close him down from behind and chip a first-time effort just wide.

Liverpool made it 2-0 within two more minutes, though, with Clark’s strike hammering off the post to be converted by ex-Celtic winger Ben Doak on the rebound.

The captain, Quansah, making his return from injury, was a powerful presence throughout, and beyond bullying the Rangers forward line in his natural role at centre-back, he added a goal at the other end for 3-0.

It came via another trademark corner from Corness, with Quansah steaming into position to head in and make a third consecutive win a certainty for Liverpool.

A terrific Chambers bent wide with an arrowed left-footed drive, Clark drew a save and Doak could only fire at the goalkeeper as the young Reds pushed heavily for a fourth.

The pace slowed in the final 20 minutes, but the probing play of Corness in the No. 6 role still laid on chances, Melkamu Frauendorf spurning a one-on-one after a brilliant through ball.

It eventually came through Frauendorf’s replacement, with Trent Kone-Doherty drifting into space and clipping a pass for Chambers to thrash home and seal a 4-1 triumph – the only blemish a last-second goal from Connor Young.