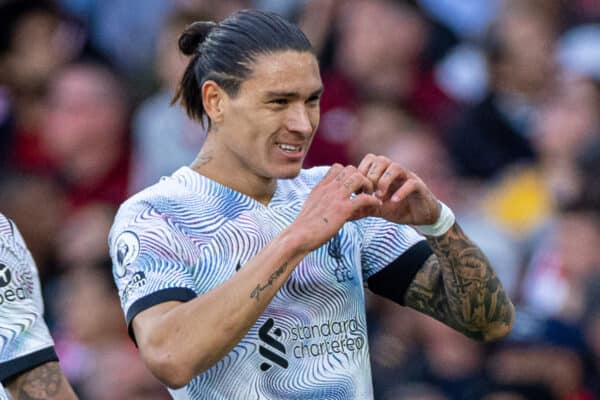 There were few real positives to take from Liverpool’s 3-2 defeat to Arsenal on Sunday, but fans were relieved to see the impressive Darwin Nunez score.

Frustrated throughout the 2-0 win over Rangers last week, Nunez spoke afterwards about not feeling “completely confident,” but vowed that “the goal will come.”

The 23-year-old had gone six games without scoring, after netting in his first two games for the club, and the performance of Allan McGregor at Anfield only heightened his agony.

That was soothed on Sunday, though, as he equalised for 1-1 on an afternoon that ultimately ended in another loss for Liverpool.

Few players came away from the Emirates with credit, but Nunez was one of those who stood out, firing three shots on goal and two on target, with his movement causing problems throughout.

The mood was downcast after the game, but supporters were still eager to praise the No. 27 for a big step forward in his adjustment.

It will get lost in all the noise but Nunez and Diaz were excellent today. Young, hungry footballers with a point to prove. Liverpool need more of that.

Nunez was definitely a bright spark.

We need him and Firmino to keep firing, especially with Salah and Jota so out of sorts… #LFC pic.twitter.com/vncjsbGz5b

One positive again from today is Nunez.

No doubt whatsoever he will come good.

Nunez is the only one deserving of a start midweek.

If Nunez was playing with City ahead of De Bruyne he'd already have 10 plus goals, his movement is excellent, he is just unlucky he is playing with a really poor Liverpool side at the moment

A small positive from a miserable day at the Emirate’s was this man scoring ???. Núñez took his goal well, looked a real handful and is only going to get better ?? #LFC #Núñez #YNWA pic.twitter.com/exds6xQtgV

Darwin is finally finding his boots at Liverpool. Good performances by him in the past two games. I have backed this guy from the start. He will be a success at Liverpool but will need time as thats how Jurgen operates with new signings. Cant wait to see him do his thing.

So, too, was Gary Neville who, speaking to Sky Sports following the 3-2, hailed Nunez as the “best player” on the pitch for Liverpool.

“I thought he was really good. I thought even in the difficult parts of the game for Liverpool he was the best player. His runs were good,” he said.

“Liverpool needed a centre-forward. Mane leaving, Firmino, I think people who watch him far more than I do say he’s the one who’s just dropping off a little bit, so they had to revitalise that front three.

“We know Jota had come in and Diaz, but they needed a centre-forward.”

Neville added: “That sending off he had against Crystal Palace has knocked him, no doubt, but I thought there were really good signs from Nunez today.

“I thought he looked a real handful up there, making good runs in behind, pressing.”

Nunez’s celebration was a questionable one given the context, taunting Arsenal fans by wiping his eyes to mimic crying, but it showed his relief at finally scoring again.

The hope is that the Uruguayan can build on two promising showings against Rangers and Arsenal ahead of a likely third consecutive start in the reverse fixture at Ibrox on Wednesday night.

A club-record signing, it is clear that Jurgen Klopp is banking on Nunez to come good as his focal point in attack – and with Liverpool desperately out of form, he may need him to do so sooner rather than later.