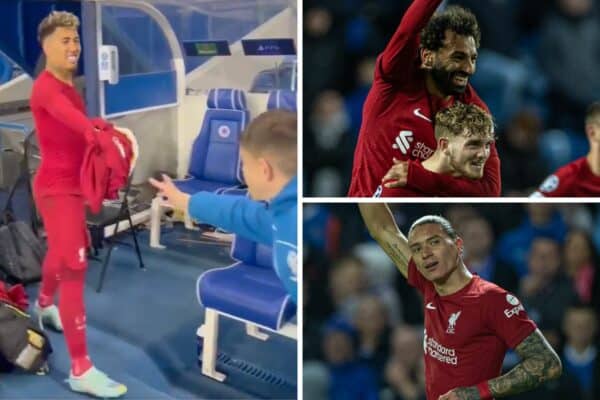 When Liverpool conceded yet another opening goal after Scott Arfield slotted home in the first half at Ibrox on Wednesday, nobody could have envisaged the way the game would eventually pan out.

It turned out to be an historic night for Liverpool, and hopefully one that we will look back on as a turning point at the end of the season.

And it’s not just the match action that people are looking at today. Here, we’ve picked out four particular things fans are talking about after a brilliant night in Glasgow.

Bobby Firmino – a class act on and off the pitch

Doesn’t this just make you smile.

As he was walking off the pitch after another terrific individual performance, Firmino stopped to give his match jersey away to a Rangers ball boy.

Many assumed this would be Firmino’s farewell season at Liverpool. A bit-part role and an exit on a free transfer next summer, but with eight goals and four assists to his name already, he really is making a case to be handed a new contract.

Firmino now only one goal behind Haaland in October

True facts this season. Firmino is on fire ? pic.twitter.com/Ye051dcZVu

And now he does English interviews?!

After receiving his Player of the Match award after the game, Firmino held an interview with UEFA that he conducted in English.

Considering he arrived at the club in 2015, we maybe shouldn’t be so surprised about this, but Firmino is very rarely heard speaking English.

During the interview, he revealed how he predicted to Darwin Nunez that Salah would score a hat-trick.

After the game, he received the Champions League Player of the Match award, and despite Salah’s crazy cameo, could anyone really argue with that?

This was a great moment.

Elliott’s initial release of emotion after scoring Liverpool’s seventh goal was short-lived, after the linesman raised his flag for offside.

But VAR came to his rescue, with a lengthy check eventually resulting in the goal being given.

During the wait, Salah came over to join Elliott, who had his fingers crossed in anticipation.

And when the goal was awarded, Harvey’s celebration was brilliant. A deserved first European goal for our No. 19!

The Salah Elliott embrace was beautiful to watch ?? pic.twitter.com/d0RHucNUUR

Love how much it means to him ? pic.twitter.com/TXVilIcoTC


After promising changes earlier in the season, a change in formation finally arrived against Rangers which the team have described as a 4-4-2 setup.

Who else is loving Nunez’s goal celebrations?

His reaction to scoring in the Community Shield against Man City was a sign of things to come from the Uruguayan.

Jürgen Klopp on the confidence flowing for his forwards following a 7-1 win over Rangers. ? pic.twitter.com/DJngb4TWQp

Up until his goal, Nunez hadn’t had the easiest of games, and the relief in his celebration was clear for all to see when he tucked home the Reds’ third of the night.