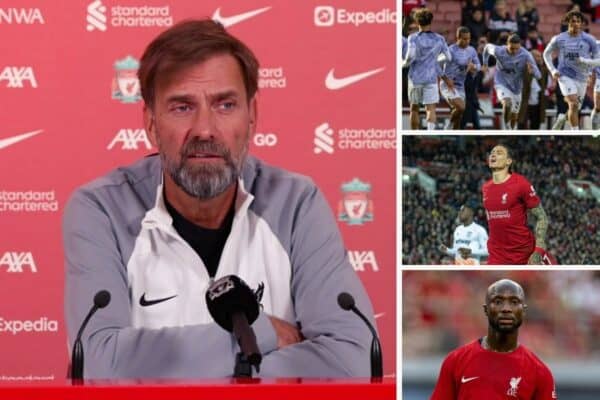 This Is Anfield  •  Liverpool FC Videos  •

Gerrard, the 4-4-2 & will he be on the touchline? – 5 key things from Klopp’s pre-Forest press conference

Ahead of Liverpool’s visit to Nottingham Forest, Jurgen Klopp spoke about whether he will be on the touchline, injuries, comebacks and the “stability” the 4-4-2 offers.

Here are five key points from the manager ahead of Saturday’s game:

“We will see” on Nunez

After scoring the winner and being withdrawn before the hour mark against the Hammers, Klopp revealed that his No. 27 “felt a little bit the hamstring at half-time.”

A precautionary approach but an issue that is still being monitored.

“We have to check now, he had treatment yesterday and we will see what I get told later,” the manager said of Nunez.

Fingers crossed he is fit and raring to go, we can’t be having another injury in attack!

Gerrard will bounce back

It was confirmed on Thursday evening that Steven Gerrard had been sacked by Aston Villa after less than a year in charge, with a 3-0 loss at Fulham the final straw.

Klopp shared that he has made contact with Gerrard and knows he “will come back” after being relieved of his duties.

“I am very sure he will come back from that. I always followed him, we had a little exchange this morning but nothing too deep, not a long conversation,” Klopp said.

“I can imagine he’s disappointed because of the ambitions he had and the things he wanted to achieve but I don’t think we have to worry about him.

“We all get knocks in life, it’s how we respond.”

Ibrahima Konate is nearing a return, expected to be in full training on Monday, while Naby Keita is making the first steps after a lengthy layoff – he hasn’t played since the Community Shield.

“We cannot rush it. It was a serious injury but only back in parts of training,” the manager said of his No. 8.

“From Monday on, Naby and Ibou will be in full training, if everything goes as planned. From there, [Naby’s] pre-season starts then, he was out for a while.”

There is an expectation that Keita will see minutes on the pitch before the World Cup but Liverpool are eager to make sure he is in the best shape possible before returning.

A charge was handed down for Klopp’s actions on the touchline against Man City and he had until Friday to respond, which allowed him to take his place in the dugout against West Ham.

But as things stand, at the time of writing, Klopp expects to be on the bench at Forest – but he’s not completely sure on the fact.

“We just follow the process, in this moment I expect to be on the bench, but I don’t know 100 percent,” Klopp explained.

“We are not to used to it but we have enough people who know how it goes.”

If a ban does need to be served and it is not confirmed before the trip to Forest, Liverpool’s next league game is against Leeds at Anfield on October 29.

Liverpool shifted to a 4-4-2 formation earlier this month and they have looked all the better for it, results speak for themselves too.

Asked about the system and the changes Liverpool are making, Klopp spoke of the stability it offers and how his side still need to be flexible based on the personnel available to them.

“Stability and closing gaps we left open – not on purpose it just happened, we played for quite a time a specific way and when you get used to things you lose a little desire for detail.

“Little things can change a lot so that’s why we had to change a big thing and start thinking new about it as a group.

“It’s not a big difference, it’s a change of responsibility slightly. It gave us, so far, more stability in different moments and in the last game we changed to a 4-5-1 to get stability again.

“It all depends on who is available, fit – when we started the 4-4-2 we had two more strikers available, so we have to stay open to all the possibilities.”