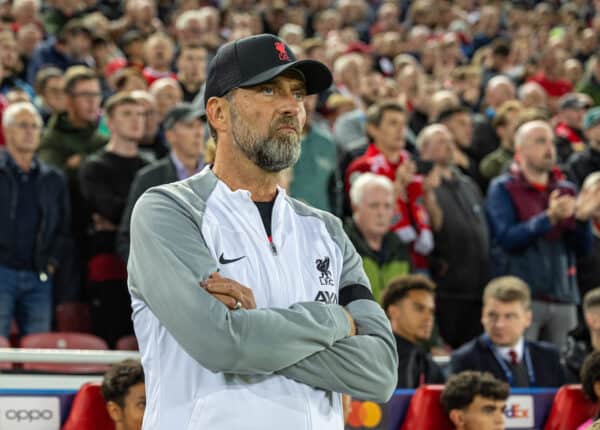 Liverpool must bring end to poor first-half record against Rangers

Liverpool must bring an end to their recurring slow starts to matches in their Champions League meeting with Rangers on Tuesday.

The Reds have led at half-time in just three of their last 20 games in all competitions and in two of their 10 outings this season.

Jurgen Klopp‘s side have conceded the first goal in 12 of their last 15 matches in all competitions, going 1-0 down within the first five minutes in five of those games.

They have only been in winning positions in three of their seven Premier League matches so far this term.

Liverpool have only kept two clean sheets in the last 13 games in all competitions.

They have not kept a clean sheet in European competition since the 2-0 semi-final home win over Villarreal last season.

Rangers and Liverpool are meeting for the first time ever in Europe, and the Scottish club will be the Reds’ 134th different opponent in European competition.

They last met in a friendly 11 years ago this month, with Rangers winning 1-0 at Ibrox.

Rangers will be the fifth different Scottish team to face Liverpool in Europe following Celtic, Hibernian, Aberdeen and Hearts.

Liverpool have lost to Scottish opposition once at Anfield in seven matches, with Celtic winning on Merseyside in the quarter-finals of the UEFA Cup in March 2003.

The Reds’ biggest win over opposition from north of the border came in November 1980 when Aberdeen, managed by Alex Ferguson, were dispatched 4-0 at Anfield in the European Cup. The hosts went on to lift the trophy.

This game could see James Milner play his 300th game for Liverpool.

His appearance against Ajax last month was his 50th for the Reds in the Champions League.

Liverpool’s last red card in Europe came five years ago today, with Joe Gomez sent off in the last minute of a 2-2 home draw with Sevilla.

Joel Matip has now scored for Liverpool in each of his seven seasons at Anfield. The 2021/22 campaign was his most prolific with three goals.

The centre-back’s goal against Ajax last month was his first in the Champions League for nine years when he scored against Basel while with Schalke.

In the last group match Stefan Bajcetic became the youngest player ever to appear for Liverpool in the Champions League, at the age of 17 years 326 days and the fourth youngest in Europe in the club’s history after Phil Charnock, Raheem Sterling and Michael Owen.

In the Europa League in November 2020, Darwin Nunez came off the bench to score a 91st minute equaliser against Rangers in a Europa League group fixture that finished 3-3 in Lisbon.

Luis Diaz netted against ‘The Gers’ in a Europa League group match in October 2019. It was the opening goal in Porto’s 1-1 draw.

Andy Robertson has faced Rangers five times in his career with one victory and four defeats.

Only against Dundee (four times) did Calvin Ramsay make more appearances for Aberdeen than against Rangers (three).

Roberto Firmino is the club’s leading scorer this season with five goals. His last in Europe came in April’s 3-3 home draw with Benfica.

The Brazilian has scored five goals in his last 227 minutes of action at Anfield over the last four games.

Liverpool’s last hat-trick in Europe was scored by Diogo Jota, who netted three at Atalanta in the 2020/21 Champions League group stages.

Philippe Coutinho scored the last European hat-trick at Anfield in a 7-0 win over Spartak Moscow in December 2017.

This is Rangers’ first season of Champions League group football in 12 years. That season they finished third behind Manchester United and Valencia.

They have won one of their last 18 Champions League group games – beating Bursaspor of Turkey 1-0 at Ibrox in 2010-11 – with 11 defeats in that sequence. Since then they have played twice in the qualifying round, losing both times to Malmo.

This season they defeated Union Saint-Gilloise 3-2 on aggregate in the final Qualifying Round and then defeated PSV Eindhoven 3-2 overall, winning 1-0 in the Netherlands in the 2nd leg, with a goal from Antonio Colak.

They are looking for their first goal of this group phase after losing 0-4 at Ajax and in their last game 0-3 at home to Napoli.

They have won two of their last 13 away games in Europe and one of the last six (at PSV).

After losing three games in a row, Rangers have won their last two – beating Dundee United 2-1 at Ibrox and following that up with a 4-0 victory at Hearts last Saturday, with two goals from Antonio Colak and others from Alfredo Morelos and ex-Liverpool player Ryan Kent.

Last summer, Rangers signed Ben Davies from Liverpool for a fee of £4 million. He never made a first team appearance for the Reds, and was an unused substitute eight times.

Kent made one appearance for Liverpool – at Exeter in a 2-2 draw in the FA Cup in January 2016. He joined Rangers on loan for the 2018-19 season, a campaign in which he was voted PFA Young Player of the Year. He made his move permanent in the summer of 2019 for a reported £7 million.

Against Napoli last month, Allan McGregor became Rangers’ oldest ever player in the Champions League proper, aged 40 years, 226 days. David Weir was 41 years old when he appeared against Malmo in a qualifier in the same competition in July 2011.

McGregor was in goal the last time Rangers met Liverpool, in a friendly at Ibrox in October 2011. His side won
1-0.

Manager Giovanni van Bronckhorst played against Liverpool three times during his playing career – all for Arsenal. He lost at Anfield in December 2001 by a 2-1 scoreline.

Liverpool-born John Lundstram has lost all four previous games against Liverpool – wearing the colours of Sheffield United on each occasion.

The goal scored by Antonio Colak in the play-off win at PSV is Rangers’ only goal in the last five away outings in Europe. That game saw them keep their only clean sheet in the last 10 European games as the away team.

Clement Turpin, who refereed last season’s Champions League final, will be in charge at Anfield.

It was the fourth time Turpin has overseen a Liverpool game and the first defeat under his watch with two victories and one draw for the Reds in his previous three games dating back to 2015/16.