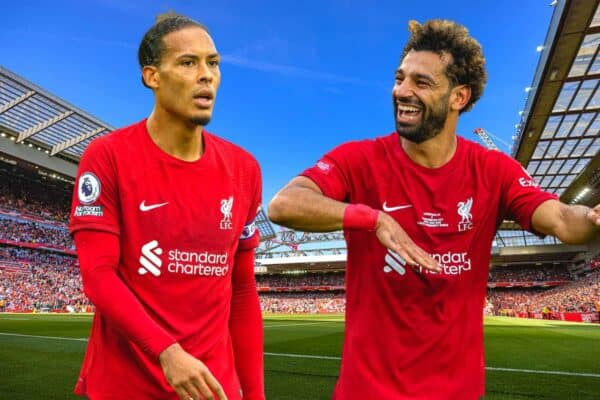 How Van Dijk can extend record & Salah can break one for Liverpool vs. Brighton

Liverpool will be hoping for a winning start to their hectic pre-World Cup schedule when they host Brighton at Anfield, with Virgil van Dijk aiming to extend a record and Mohamed Salah potentially breaking another.

Van Dijk is still unbeaten in all 67 home league games he’s played for Liverpool, having surpassed the record Lee Sharpe set (59) for Man United in March.

Should Salah score, he will overtake Kenny Dalglish as the player to score the most goals for Liverpool against Brighton in all games. Both currently have six to their names.

The Egyptian’s next goal will see him move into outright eighth place on the club’s all-time league scorers list and move to within two goals of Jack Parkinson in seventh. Salah currently has 120 goals in the top-flight.

Recent struggles against the Seagulls

Liverpool have won just one of their last four league encounters with Brighton, scoring five times in that sequence.

The last Anfield meeting between the two teams was a 2-2 draw last October.

The away side are on their longest unbeaten run at Anfield (two matches) since losing 2-1 in November 2019.

This will be the 27th league meeting between the teams – Liverpool have 15 wins to their name, and Brighton three.

Of the 35 previous meetings in all competitions the Reds have won 20 and Brighton five, with 10 draws.

This is Brighton‘s first game in 27 days following the postponement of their games at Bournemouth and at home to Crystal Palace.

Roberto Di Zerbi will take charge for the first time. The 43-year old has managed more than 300 times in his career with six clubs, latterly Shakhtar Donetsk in Ukraine.

They have won four of their six league games so far with one draw and a solitary defeat away to Fulham.

They won at Man United for the first time in their history and have also beaten West Ham away and Leeds and Leicester City at home.

Their 5-2 win over Leicester saw them score five goals in a top-flight league game for the first time in their history, in what was their 364th game at that level.

A game of few goals?

Only Brighton (5) have conceded fewer Premier League goals this season than Liverpool’s six. Half of those goals against the Reds have come between the 32nd and 38th minutes.

Liverpool are undefeated in the last 81 league outings at home in front of fans and in the last 77 with a full house, since losing to Crystal Palace in April 2017.

Fabinho could make his 150th start for Liverpool in all competitions on Saturday.

Alisson will celebrate his 30th birthday the day after this game while on the same day Roberto Firmino will turn 31 years of age.

Diogo Jota has scored three goals in his last five games against Brighton.

When finding the net in the Reds win over Ajax at Anfield last month Joel Matip registered a goal for the 14th consecutive season of his senior career.

Andy Madley will be in charge at Anfield, having never reffed a meeting between these 2 teams before.

He has issued 14 yellow cards in four top-flight games this season, overseeing Liverpool’s opening day draw against Fulham in August.