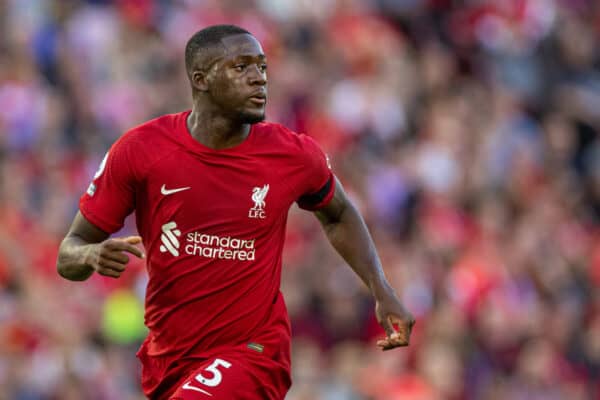 Ibrahima Konate in doubt vs. Man City with muscle problem

Ibrahima Konate is a doubt to feature against Man City on Sunday due to a muscle problem, just two games into his return from a two-month layoff.

The centre-back was a notable absentee from the training pictures and footage released on Friday, leading to plenty of speculation as to his whereabouts.

A similar issue arose last week when Thiago was missing, only to start at Arsenal without issue, but the same cannot be said for Konate.

The Athletic’s David Ornstein and James Pearce report that the Frenchman is in doubt for Sunday’s game due to a muscle injury, with further assessment planned for Saturday.

It is said that the issue is “minor” but with Konate having only just returned from a two-month layoff with a knee injury, Liverpool will, understandably, not be eager to take any risks.

It is untimely, to say the least, with Joel Matip currently sidelined with a calf issue, leaving Virgil van Dijk, Joe Gomez and Nat Phillips as Jurgen Klopp‘s centre-back options.

If the Reds do err on the side of caution with Konate, it is likely that Gomez will shift into his favoured centre-back role while James Milner slots in at right-back in Trent Alexander-Arnold‘s absence.

Liverpool’s vice-captain has not started a game since the nightmare that was the trip to Napoli at the start of September, making four substitute appearances in that time.

Konate, meanwhile, started at Rangers in midweek and played 79 minutes before being withdrawn, following on from his 21 minutes at Arsenal – his first outing of the season.