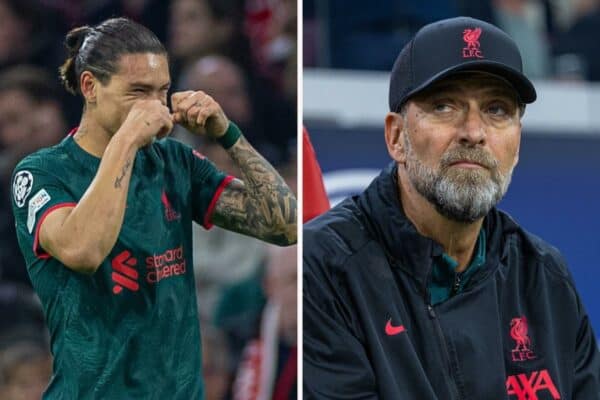 Liverpool lined up in another new system on Wednesday night, with Jurgen Klopp explaining his 4-4-2 diamond after a 3-0 victory over Ajax.

In recent weeks, the Reds have found success in their 4-4-2 setup, with two wingers and two central strikers, but were dealt a blow to their confidence on Saturday.

After a 1-0 defeat at Nottingham Forest that showed little in terms of creativity, they were then tasked with getting the result needed away to Ajax and book their place in the Champions League last 16.

There was some confusion early on as to how Liverpool were shaping up in Amsterdam, but the system soon settled into a 4-4-2 with a diamond midfield, leaving Darwin Nunez and Mohamed Salah up front.

And after his side’s comfortable win, Klopp explained his tactical switch in an interview with BT Sport.

“We obviously changed system again a little bit. We had to,” he insisted.

“We thought it made sense that it was rather a diamond than a 4-3-3.

“Then it’s new again for the boys, but we didn’t want to have Darwin constantly on the wing, we wanted him more central.

“That’s why we set it up slightly different.”

There were clear teething problems in the opening stages as Ajax went close to opening the scoring on a number of occasions, with none of Nunez, Salah or Roberto Firmino appearing certain of their roles.

But with Salah breaking the deadlock just before half-time and both Nunez and wide midfielder Harvey Elliott scoring after the break, it led to a dominant display.

Nunez should have made it 2-0 before the interval, in fact, only to waste an open-goal opportunity, though Klopp claimed it “probably explains Bobby Firmino in a nutshell” as “when he passed the ball I think Darwin was surprised as well!”

“Both directions, helped defending, played with a big heart today and I liked that a lot.

“Hopefully we took him off early enough!”

In the absence of Diogo Jota and Luis Diaz, Liverpool are managing Nunez’s minutes as he battles with hamstring issues, and as Klopp admitted, the hope is his withdrawal in the 63rd minute keeps him in contention for Saturday.

It is unlikely that the 4-4-2 diamond will stay for the visit of Leeds, but it at least gives the manager another option.