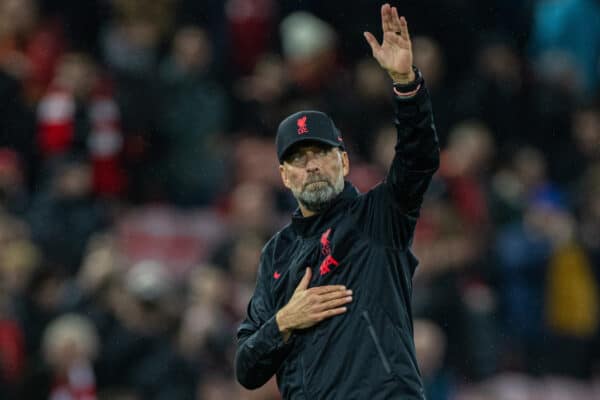 Liverpool secured their second Champions League victory on the bounce with a 2-0 win over Rangers on Tuesday, with Jurgen Klopp explaining his decision to change the team’s formation in more detail after the game.

The Reds set up in what many are referring to as a 4-2-3-1 formation, with four recognised attackers in Diogo Jota, Mohamed Salah, Luis Diaz and Darwin Nunez.

Jordan Henderson and Thiago anchored the midfield, with the average positions of the likes of Trent Alexander-Arnold noticeably more reserved.

It was a change that paid off, with Liverpool easing to a 2-0 victory and solid throughout, with all eyes now on whether Klopp sticks with the system in the coming weeks.

Speaking after the game, Klopp was asked to shed more light on his team’s performance in the new shape.

“It was exactly what we needed,” he told BT Sport.

“We needed a super, super solid performance, top defending, everybody committing, in a new formation. Sometimes you have to change things obviously and it worked out for us tonight.

“A bit of a surprise for Rangers, of course, the way we set up, that was one of the ideas, but it was more of an idea for us to get into the right spaces and we did that.”

The Liverpool boss went on to reveal how the team only had one training session to work on the new shape.

“One session, not more,” he continued.

“We recovered from the last game physically and then we told the boys how we wanted to set it up. I thought they did particularly well.

“One of my favourite moments, where you could see we didn’t do it more often, was when Darwin cut the ball back, but the other two strikers are already towards the line. If one of them waits, it’s the perfect pass.

“Unlucky in moments offensively, rock solid defensively, apart from the last few minutes where they had the header after the corner, but yeah, that’s it now.”

Captain Henderson looked more comfortable in a deeper midfield role, emerging from the game as one of the Reds’ standout performers on the night.

He too was pleased with the impact of the new system.

“It felt good,” he told BT Sport when asked about his deeper role in the team.

“So overall, I think we’ve got to be really pleased and it’s a step in the right direction, for sure.”

Alexander-Arnold, who, in recent days, has been in the spotlight after a poor defensive performance against Brighton, scored an excellent free-kick to open the scoring, and referred to the new shape as “more of a basic 4-4-2″ after the game.

“We went back to a little bit more of a basic 4-4-2 and played it really well,” he told BT Sport at full-time.

“We shifted across the pitch really well, made it compact, they couldn’t play through us, they were playing a lot of long balls and we were picking up the second balls.

“The change of tactic definitely helped us today, so we’ll see what happens going forward.”