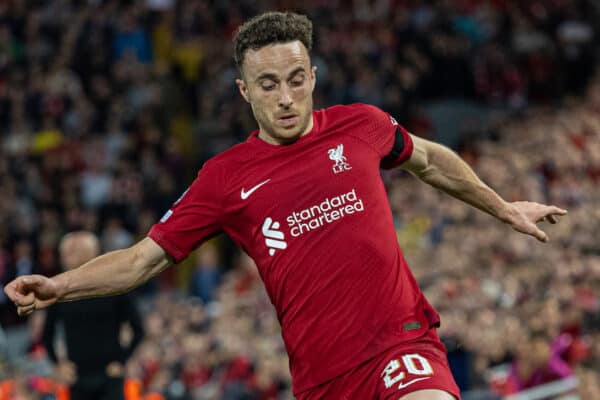 Jurgen Klopp was not overly optimistic over Diogo Jota‘s injury after he was stretchered off in the final moments of Liverpool’s 1-0 win against Man City.

Deep into stoppage time of the Reds’ memorable win over Pep Guardiola’s side, Jota dropped to the turf in clear discomfort.

It came after he pulled short in a challenge, quickly grabbing the back of his right leg before a stretcher was called to take him off the pitch.

After missing the first six games of the season, with the same injury, it looks to be yet another cruel blow for both Jota and Liverpool.

The full extent of the damage will not be known until Monday at the earliest and Klopp was left wishing it was a point he didn’t need to discuss after the victory.

“We miss the next one with Diogo. He felt real pain in that moment but I have no idea how bad it is,” Klopp first told Sky Sports.

“If Diogo stays down it is not good.”

In his post-match press conference, Klopp added: “Diogo…I wish I wouldn’t have to talk about it.

“I saw it inside on the screen, I’m the first who saw it, when he goes down there is not a lot of contact.

“I can see a little bit [that] someone kicks his foot and then maybe the muscle got overstretched.

“After 96 minutes that is not good for a muscle, he felt it immediately and now we have to wait [to see] how bad it is.”

With Luis Diaz already sidelined until after the World Cup, it’s not an injury Liverpool need, especially when persisting with the 4-4-2 system.

The Reds can only hope that it is not a serious issue for Jota with eight games to come in the next 27 days before the World Cup, not to mention the No. 20 will not want to miss representing Portugal.