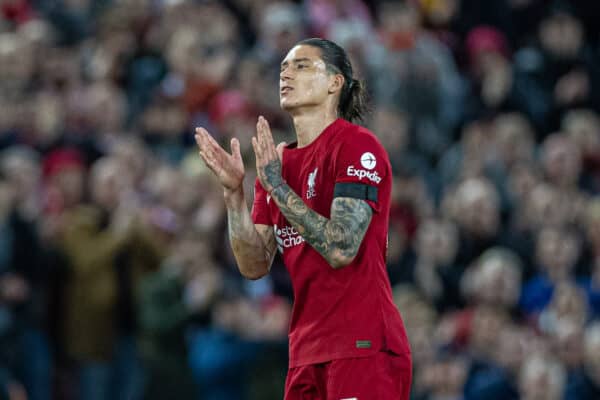 Darwin Nunez made his first Anfield start in a more orthodox No. 9 position, with Jurgen Klopp pleased with his role in the 2-0 win over Rangers.

As the Reds hosted Rangers in their third group game of this season’s Champions League, Klopp sprung a surprise as he fielded four attackers in a 4-4-2 setup.

Nunez came into the side along with Luis Diaz and Diogo Jota, joining Mohamed Salah in the forward line as a much-improved display played out under the lights.

Though he was unable to find the back of the net, the Uruguayan was impressive in his movement and holdup play – with Rangers goalkeeper Allan McGregor pulling off a number of strong saves to deny him, too.

Speaking in his post-match press conference, Klopp agreed that his No. 27 is clearly desperate to score, but praised his all-round performance in a “new structure” for the team.

“I think you can see that,” he said of Nunez’s eagerness.

“The way the boys moved up front I thought was extremely, extremely good for only one session working on it, to be honest.

“We never did it before, we had now one session and that with a low intensity because we only played recently.

“So that just shows how good a striker he is, constantly in these situations.

“I think everyone saw tonight that this will happen, so all good.”

It was put to Klopp that Rangers also deviated from their usual formation as Giovanni van Bronckhorst deployed a five-man defence, but his focus was on Liverpool’s approach.

“I think our setup was the biggest surprise tonight. I think we surprised ourselves!” he joked.

“These situations can then happen. It was difficult to defend. I think Diogo Jota moved really in between the lines, Darwin kept them away.

“But now we will see what we do when we come to Rangers.

“We respect them a lot and we know it’s a different game, different occasion and we don’t even think that we are kind of halfway through or on the right side.