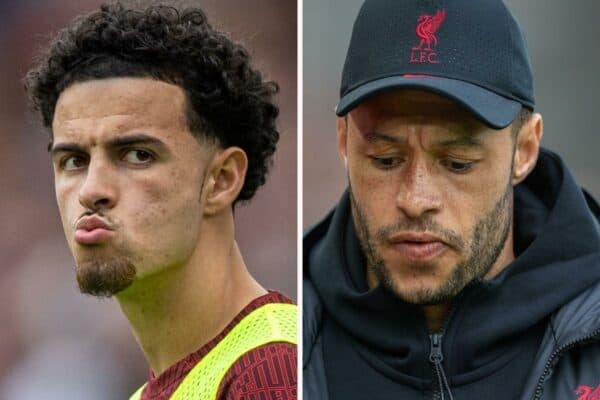 For the first time this season, the Reds secured their third consecutive victory on Wednesday night as Darwin Nunez‘s header downed West Ham at Anfield.

It comes during a more positive run for Klopp’s side, despite injuries to Luis Diaz and Diogo Jota blighting his selection in recent weeks – the duo set to be out until after the World Cup.

Liverpool were, at least, boosted by the availability of Jones and Oxlade-Chamberlain against the Hammers, one making his first appearance of the season proper and the other making the bench for the first time.

For Jones it was a big step forward, having only previously made the matchday squad two times in the Premier League due to persistent calf issues.

And speaking to beIN SPORTS after the game, Klopp touched upon the importance of having Jones and Oxlade-Chamberlain back fit.

“I think on a private basis he will get all the headlines, because it was a long time, his first game of the season if I’m right,” the manager said on Jones.

“He had a horrible…not a bad injury, but one that did not go away. I hope now everything is fine.

“For the first game, it was obviously a really intense one, quite long being on the pitch. The next one is waiting.

Jones replaced Fabio Carvalho for the final 33 minutes against West Ham, and it was interesting that the 21-year-old was deployed on the left flank as the 4-4-2 system remained.

Both he and Oxlade-Chamberlain have largely been considered central midfield options throughout Klopp’s reign, but with the new formation in place, they could become more useful out wide.

That certainly magnifies Klopp’s comment on their return being “very important,” given Liverpool are now without Diaz and Jota for the foreseeable future.

It will still take time, with the manager stressing the need for more training after long-term injuries, but they could now join Carvalho and Harvey Elliott as regular options on the wing.

This would give Liverpool more unpredictability, for sure, during a run of games that sees them play seven more times in the space of 22 days, including a League Cup clash with Derby on November 9.