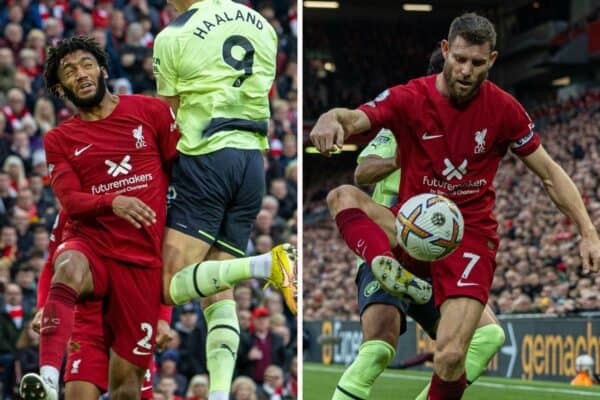 Jurgen Klopp was full of praise for his defensive line following Liverpool’s 1-0 win over Man City, singling out Joe Gomez and James Milner in particular.

For only the second time this season, a team was able to keep a clean sheet against Man City.

In fact, it was the second time in a week, with Alisson‘s successful shutout coming five days after ex-Liverpool youngster Kamil Grabara helped FC Copenhagen to a 0-0 draw in the Champions League.

The feat was made all the more impressive for Liverpool given half of Klopp’s first-choice defence was not deemed fit to start, while Andy Robertson made his first start after injury.

Gomez and Milner filled in for Ibrahima Konate and Trent Alexander-Arnold, and despite fears before kickoff, they both produced outstanding displays on the way to a 1-0 victory.

An excellent performance from your #LIVMCI @Carlsberg Player of the Match ? pic.twitter.com/zEAR1Y0uqb

The Man of the Match award went to Gomez, and in his post-match press conference, Klopp lauded the No. 2.

“It’s just great for Joey that he can show what a player he is,” the manager said.

“Today was a sensationally mature performance, together with Virgil and the two full-backs.”

But along with Gomez, Klopp was eager to highlight the role of Milner, who was widely considered the weak link in the Liverpool lineup, a 36-year-old out of position against Phil Foden.

“It’s fine, Joey deserves all the praise, but I’m pretty sure before the game a lot of people thought ‘oh James Milner against Phil Foden’,” Klopp continued.

“The game James Milner played was absolutely unbelievable. And Joey as well, which means the right side obviously did pretty well.

“Robbo was there, top-class game, Virgil as well and in the moments we needed Ali, he was there as well.

“So our defensive line was for sure the best game we’ve played this season. That’s good.

“Timing-wise [it was] nearly perfect to do that today, but that’s the way we have to defend.

“Now we have three days for recover pretty much and to prepare for West Ham, then we have to go again.

“They will ask for absolutely everything as well. The next tough game is waiting.”