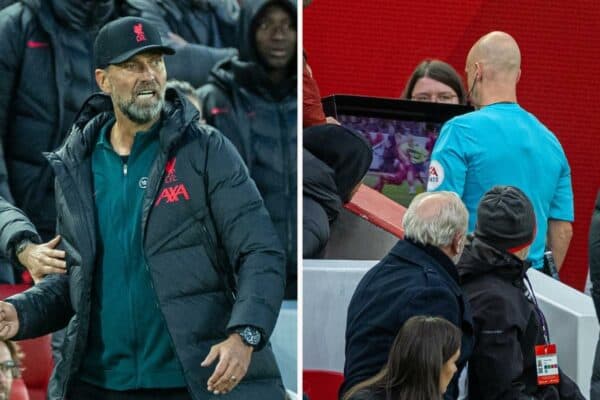 Jurgen Klopp expects to be in the dugout when Liverpool take on West Ham on Wednesday night, despite receiving a red card on Sunday.

Klopp was shown a red card for confronting linesman Gary Beswick during the 1-0 win over Man City, after the official overlooked Bernardo Silva wrestling Mohamed Salah down right in front of him.

The 55-year-old is now set to be reprimanded by the FA, with a one-match touchline ban the likely result, but that process is yet to get underway.

In his pre-West Ham press conference, Klopp reiterated that he will accept the decision over his dismissal, and revealed a “completely calm discussion” with referee Anthony Taylor after the victory at Anfield.

“I think I will be there tomorrow, because nothing really happened yet,” he said.

“I don’t think that something will happen tomorrow, to be honest, a few hours before the game.

“I still think I should have dealt differently with the situation, which I actually do usually.

“I explained it after the game. In this moment you could not bring me in this mood, no chance. But the whole game led to that maybe a little bit, the way it went.

“It was a very, very intense game, with a lot of decisions both managers didn’t understand, on both sides.

“This was, then, for me, like how we say in Germany, the one drop that lets the bucket overflow.

“I’m not happy with my reaction but that’s the way it was and everybody saw it.

“I was sitting after the game in the office of Anthony Taylor and spoke about it completely calm, about all the situations, how he saw the game and how I saw the game.

“It was a completely calm discussion.

“But, anyway, that’s the situation. I got a red card and now we wait for the process, pretty much.”