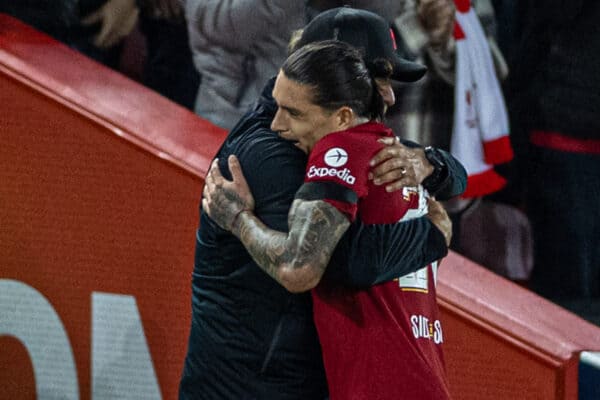 Jurgen Klopp wants Darwin Nunez “not to change,” but to “calm himself down”

Jurgen Klopp has acknowledged Darwin Nunez is not feeling his most confident but with a touch of composure he can make his “exceptional movements” count on the scoreboard.

Two goals in 341 minutes of action for Liverpool has seen a spotlight start to shine brighter on Nunez, who has admitted that does “feel a little indecisive.”

Teething problems that come with the territory of moving to a new team in a new country with a language you cannot speak fluently, ensuring he doesn’t “understand anything” when Klopp talks.

It’s far from ideal but Spanish speakers at the club have been key in his transition so far.

On Friday, Klopp said there is every reason to be “very optimistic” for what is to come from Nunez, and he later expanded on his comments, acknowledging the need for the No. 27 to be more composed with his finishing.

“I think he said himself he feels the pressure, needs to calm himself down,” Klopp said.

“You can see the movements are exceptional and if you would see him finishing in training you would think, ‘Oof, my god’.

“In games a bit of a rush, needs to calm down in these moments. We use his full range of finishing but as a striker it’s just something you need to feel and go from there.

“Not to change, just to keep going, actually.”

As for Nunez’s confidence and ability to communicate, Klopp knows there is growth to be had but has seen more than enough to feel “everything will be fine,” especially considering the current form of the entire team.

“He’s a kid as well, how they all are in moments, but he’s a confident person as well – but not a grown up man already.

“We all know you can have a baby and still have to grow still as a boy, a man – it’s clear but it’s all fine.

“People told me that the headline was ‘I actually don’t understand a word of what he is saying’. I know that. It was the same with Bobby Firmino and other players.

“A big part of Bobby’s success was that he didn’t understand a word I said,” Klopp joked. “Because he did everything right without understanding me.

“For Darwin, it is slightly different. He gets all the necessary information, obviously, a Spanish speaker in the coaching staff and in the team as well.

“I understand why you ask. It’s not the perfect start, he had a three-game suspension and now it’s still here [in the head].

“He’s an aggressive player, he’s emotional but this should never happen again.

“I really like his movements, that’s natural and it’s something we didn’t have in that way before and that’s what I like and that’s why I’m sure everything will be fine.

“What is the worst thing that can happen when you come in as a striker into a new team? That your team is not playing exceptionally well, because you depend on the things they bring to you.”