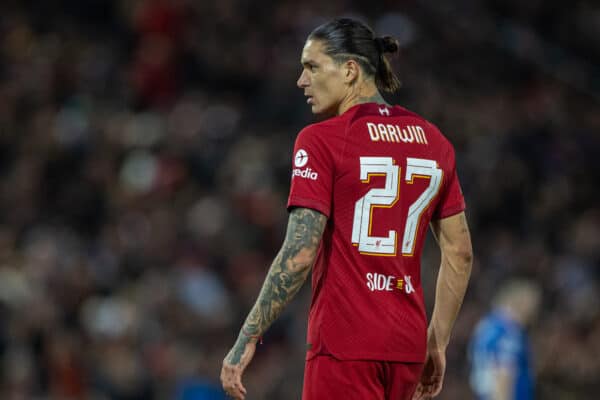 Darwin Nunez made his third start of the season in midweek, a performance that showed promise despite no end product and Jurgen Klopp says there’s every reason to be “very optimistic” for what is to come.

The 23-year-old has featured for a total of 341 minutes to date this season with a return of two goals, with the striker recently admitting he has not been feeling “completely confident.”

The language barrier, which means he doesn’t “understand anything” in Klopp’s team meetings, has added further complexity to his settling-in period.

With the help of his teammates and coaches, he is finding his feet one training session and game at a time.

And Klopp told reporters there is plenty still to come when asked if Nunez’s positive performance in midweek was down to his work or assisted by Liverpool’s change to a 4-4-2 formation.

“Was down to his movement and down to the movement of all the boys around,” Klopp said of the performance from his No. 27.

“One of the things he showed so far in all the games he played [is] he brings himself quite frequently into good finishing positions, which is actually the most important thing for a striker.

“That’s why everybody should be, or could be, very optimistic about what’s coming from him in the future.

“That was absolutely good [vs. Rangers].”

As the manager said, the volume of opportunities Nunez finds himself at the end of promises plenty, and in the Uruguayan’s own words: “The goal will come. It’s like ketchup, when it comes out a little, it all comes out.”