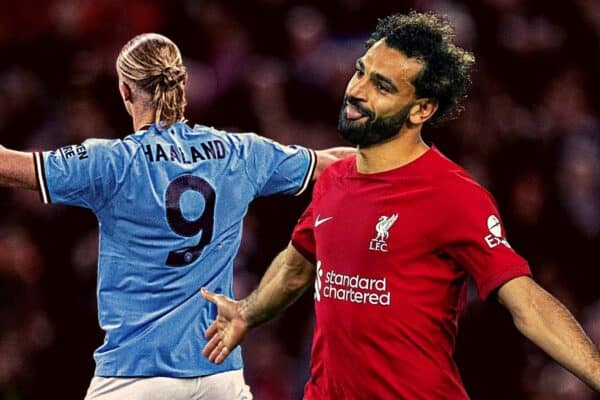 Jurgen Klopp is hopeful that Mohamed Salah is “close to exploding” into form, but believes Erling Haaland is setting ridiculous standards at present.

Salah has won the Premier League‘s Golden Boot in three of the past five seasons, with 118 goals scored in 180 league games in that period.

His record tally in the English top flight is 32, set during the 2017/18 campaign, while the Egyptian has broken the 20-goal mark on three other occasions.

But this time around, Salah has so far only struck twice in seven outings in the league, with Haaland steaming clear in the Golden Boot race after firing 15 goals in nine appearances so far.

When asked whether he feels his No. 11 is close to “exploding” this season, Klopp admitted he is hoping that is the case, but while referencing Haaland’s freakish scoring form, the manager praised Salah’s all-round game.

“With Mo, it’s like this: even when the scoring numbers are not that crazy, how often he is involved,” he explained.

“The passes for Darwin in the last game…just the problem is if you don’t score around that, nobody appreciates that.

“Then you have, not scoring, losing a ball here, then three or four exceptional, key passes.

“As a coach, in my life, it’s then easier, because I watch the whole game again and not only the highlights, which means I see these little things as well.

“So for me, it’s fine. But I understand.

“Nobody in the world can cope with the Haaland situation in the moment. It’s crazy what he’s doing.

“How he shook his head when he scored the second one in the Champions League, ‘obviously I can do what I want, the ball bounced in front of my feet’.

“But he’s an exceptional player in an exceptional team, so it obviously works pretty well together and I don’t think you could compare now, in this moment, anybody with that.

Nevertheless, Klopp accepts that Salah will not be happy until he starts finding the back of the net with regularity again – which could be soon, given he netted against Rangers in midweek.

“Call him in 20 years and it will be the same, definitely. That cannot change.

“But he brings himself together, and from my point of view, Mo defended, for example, against Rangers on an incredibly high level.

“My situation of the game was when Mo defended the half-space and won the ball from behind, so from the blindside and wins the ball there.

“It was my situation of the game. I didn’t tell anybody yet, and you might not find it if you watch the game back, but it was a great situation.

“That showed what he had to do that day, and from that moment on, we can play football.

“If this team defends on the highest level, we are able to play some good stuff, and that’s what we have to do.”