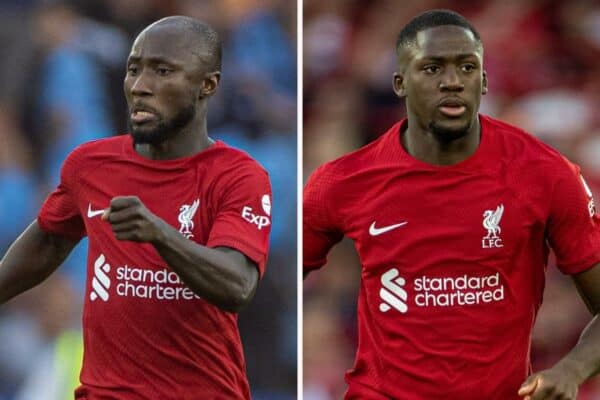 Jurgen Klopp has provided an injury update on Naby Keita and Ibrahima Konate, who are both due to return to full Liverpool training next week.

During a relentless run of fixtures, Klopp is working to manage the fitness of his squad carefully, despite a lengthy list of injuries.

Thankfully, the situation is improving by the game, with Curtis Jones and Alex Oxlade-Chamberlain back in the fold and both Keita and Konate not far off.

Previewing Liverpool’s trip to Nottingham Forest in the Premier League, the manager confirmed that the former RB Leipzig duo are set to report back imminently.

“From Monday on, Naby and Ibou, if everything goes as planned, will be involved in full team training,” Klopp explained.

“That means then from there we count days or whatever.”

Konate is likely to come straight back into contention following a short break due to a muscle injury, but a longer period of training is planned for Keita.

“His pre-season, if you want, football pre-season starts then, more or less,” Klopp continued.

“He was really out for a while, like Ox was. Ox was on the bench, I don’t think ready to play in our last game, but he gets closer.

“So he’s one or two weeks ahead of Naby, which is very helpful for us as well.

“But the situation with Naby is clear. Whatever happens in the summer, nobody knows in this moment, but it’s now about making him as fit as possible so he can sustain the awful lot of games coming up.

“There are a lot of football games to play and I can’t wait to have him back properly.”

As Klopp alluded, Keita is set to see his contract expire in the summer, with talks over an extension proving fruitless so far, but he is not focusing on the midfielder’s situation.

Instead, the priority is getting Keita “as fit as possible,” with a return to action expected before the World Cup, which kicks off on November 20.

“The thing is, what we can do in rehab with these tough muscle injuries is everything apart from team training. So you cannot replace team training.

“They do football work, they run more than we do in training sessions, because they have to, but with nothing in rehab can you replace a football session.

“If it’s a small-sided game or whatever, it’s a completely different intensity to everything you can produce in rehab.

“That’s why I say now a football part of pre-season starts, when physically he could probably now run a marathon when he starts on Monday – but that’s not helpful because he needs to do other movements.

“As long as we can give the boys time to recover fully, and get as fit as possible, we always try to do that.

“The problem is when you start with injuries in the season, then the boys who come back very often have to play too early, because there are no other options.

“In this case, I hope now that we can do that, that we can give him time until he can play, but maybe next week I tell you ‘Naby Keita starts’. I don’t know, we will see.”