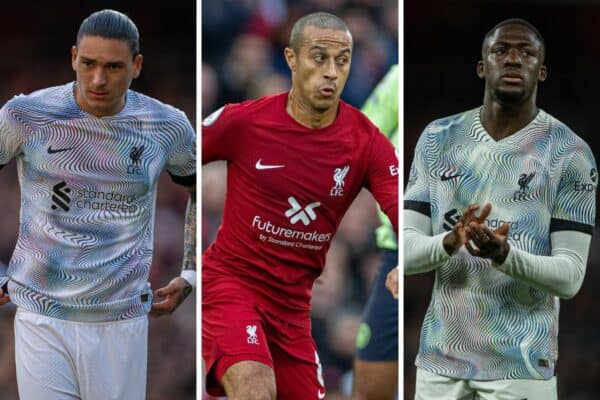 After Thiago missed Liverpool’s 1-0 defeat to Nottingham Forest with an ear problem on Saturday, Jurgen Klopp further explained the story behind his absence and provided injury updates on Darwin Nunez and Ibrahima Konate.

Curtis Jones was a late replacement for Thiago in the starting lineup, after the Spaniard woke up with a suspected infection to his ear hours before kickoff.

He was sorely missed at the City Ground, with Liverpool’s midfield below par once again, after Taiwo Awoniyi‘s goal saw the Reds beaten by Steve Cooper’s side.

Speaking to reporters after the game, Klopp revealed how Thiago was taken to hospital for a check on his ear, before being driven home when it became clear he wouldn’t be able to play a part.

Darwin Nunez also missed out, having failed to recover from the muscle discomfort that led to his withdrawal against West Ham in midweek, with the Liverpool boss updating reporters on whether Nunez or Konate could feature against Ajax on Wednesday.

“So, as I said, Thiago got a bad ear infection last night and there was no chance for him to do anything. We drove him home,” Klopp clarified.

“Darwin should be back, this game was just too early. I think another day recovery would have helped him, but we played today. At least that is my knowledge in the moment.

“Ibou will train from tomorrow on and Naby as well, but Naby is far off so he starts training now after a long period.”

When further pressed on the story behind Thiago‘s absence from the match, Klopp explained how his ear problem was only discovered when the 31-year-old woke up around 5am (BST) this morning.

It remains to be seen whether he will recover in time for Wednesday’s trip to Amsterdam.

“The decision was made in the moment he woke up and had the pain. The doctor went there and they tried everything, went to the hospital and stuff like this. It didn’t work out.”

A freak ear infection to Liverpool’s best midfielder was exactly what they didn’t need, given their ongoing injury concerns.

Nunez and Konate look likely to be available on Wednesday, with Klopp expected to ring the changes once again.