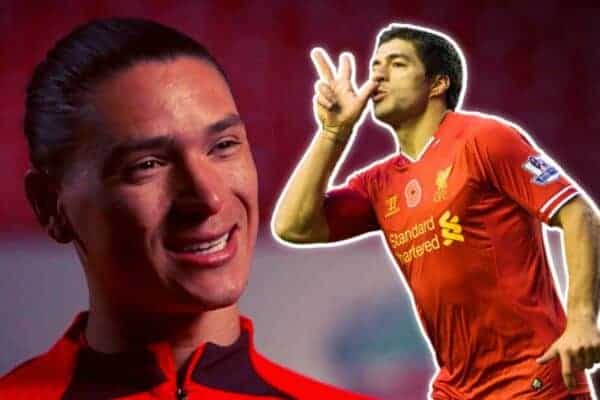 “Listen to an idiot like me!” – The advice Luis Suarez gave Darwin Nunez after red card

Darwin Nunez has revealed the advice that his international teammate, Luis Suarez, gave him after being sent off on his Liverpool home debut earlier this season.

He’s beginning to find his feet now but Nunez had a mixed start to life on Merseyside. Fortunately, Liverpool legend and Uruguayan compatriot Suarez was on hand to guide the 23-year-old when his young career reached its nadir.

After being sent off for a ‘headbutt’ on Joachim Andersen when the Reds met Crystal Palace in August, Nunez left boss Jurgen Klopp furious just three games into his Liverpool career.

However, since the incident, the summer signing has steadily improved and is becoming an important part of this Liverpool side. He’s also calmed his temper and is learning to deal with defenders’ underhand tactics, something Suarez took time a long time to master during his career.

Speaking to ESPN, Nunez revealed what Suarez, who’s now playing back at Club Nacional where he began his career, told him after the red card at Anfield in August:

“Luis told me that these things will happen in every game in the Premier League, that they’ll come and find me, that they’re going to bump into me, and that I need to make myself strong and not repeat my screw-up.”

Suarez was speaking from experience – although he was never actually sent off at Liverpool, but did, of course, serve lengthy suspensions for incidents with Patrice Evra and Branislav Ivanovic.

Nunez revealed: “He said: ‘Listen to an idiot like me!’ I really appreciate that message and the fondness he has for me.”

Nunez was thankful that his fellow striker had got in touch: “It was a good thing because not many would bother themselves to pick up the phone and send you a message. I think his gesture was really important for me.

“Luis is a reference point, an idol everywhere in the world. I’m getting started, I’m young, and he knows about all those things because he already played in the Premier League with Liverpool.”

The advice seems to be paying dividends and Nunez is now averaging a goal every 127 minutes since his dismissal.

Liverpool old and new will come together at the upcoming World Cup, where the 23-year-old and his elder are set to start up front together for Uruguay in a group that also contains Portugal, Ghana and South Korea.