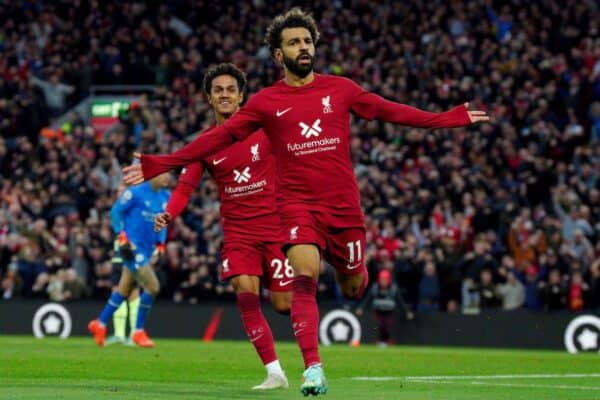 The season starts here! A stunning goal from Mohamed Salah clinched a 1-0 win over Man City, after a near-faultless performance from Liverpool.

One good stop from a one-on-one when he stayed tall; one safer save from a header which was thankfully straight at him.

Was definitely fouled by Erling Haaland for the goal which was ruled out, the second of two the ref missed just in that move alone.

A huge paw down to his right side beat away a low Haaland strike; a fantastic side-swiped pass provided an assist for Salah to run through and score.

Right-back and bossed it. Fair play James Milner, who many would have been very concerned about pre-match in this role against that attack.

Stuck absolutely diligently to the task of keeping tight enough to Bernardo Silva or Phil Foden, and didn’t overcommit in position terms.

Aside from one or two moments like Haaland escaping him for a header, he had a great game. Read runs well, clattered tackles he could and kept position nicely.

Did well up against Haaland, front-footed and anticipating balls to him, and was also vital with his pace behind Milner on occasions.

His best game for an age, and what a time to produce it. In the context of the situation and up against Haaland, man of the match.

Much more tenacious and diligent than in previous games.

Produced a big slide to cut out a dangerous ball first half, then second half produced what was nearly a diving header into his own net – brilliantly sending the ball over with Haaland lurking two yards away.

Massively consistent in judging where to be on cutbacks and crosses. At his hugest when we needed him to be.

Back after injury and shoving people around after about 30 seconds. Great to see Robbo back at this level of intensity.

Did very well against Joao Cancelo, kept the crowd revved up at every turn and won every challenge.

Got through a huge amount of work on the right side of midfield, really protecting Milner at every possible moment and still making up ground centrally and in attack.

Some good buildup moments, neat passes in the final third and even the odd chance for a chance on goal fell his way. Really good outing overall.

Much better than recent games, winning more second balls and stopping the runners having free reign through our soft centre.

A bit of a lazy yellow for his trip on Ilkay Gundogan but he couldn’t be allowed to run on so fair enough.

Perhaps he’s not fully fit at the moment, given it’s a surprise to remove him with 15 minutes to play in this type of match, but this was a big step towards where we need him more regularly.

Was integral to our forceful start with his probing balls from deep, willingness to keep taking possession under pressure and ability to quickly make a tackle.

Caught in possession a few times once the movement ahead of him started to seep away and then absolutely cleaned out Rodri – bit lucky it was only a yellow, even if he did slip!

A willing runner, ridiculously hard-worker and constant outlet for the team from the left wing.

Jota’s end product isn’t always tremendous in terms of open-play passes and this was costly a few times for potential chances, but a lot of the time they arose because of the Portuguese’s own industry anyway.

A header might have done better in the second half but he also made a number of runs which went unnoticed and unrewarded. Big defensive recovery runs and tackles.

Real worry that he was stretchered off right at the end.

Nothing came his way in front of goal this time but it was still a really strong, very important performance from Bobby.

Loads and loads of tracking back, nipping in to win a loose ball and laying off a quick pass to a team-mate; made several good runs to open counters and showed good link play in a two again.

Centre-forward Salah! Really good movement and combination play early on, plus some buzzing pressing and challenging high upfield. Much better positions for him to get the ball in and less deep defensive work to do.

Denied on a one-on-one chance you’d have backed him to finish nine times out of 10 – should he have squared to Jota?

But this is Mo Salah: relentless in creating his own chances and in taking them. One more run through after a great touch and turn and this time around there was no missing the chance.

Darwin Nunez (on for Firmino, 72′) – 7 – Honey-badgered his way through the defence several times for a strike from range or to win a foul and led the counter after we took the lead. Absolutely had to play an early pass when we went three on one.

Fabio Carvalho (on for Elliott, 72′) – 8 – Fair play for coming on and having the bottle he showed for such an inexperienced lad in this atmosphere!

Jordan Henderson (on for Fabinho, 72′) – 8 – Won balls, cleared bits, covered Milly. Did exactly as needed including telling Darwin to wise up on that non-pass.

Sent off as a result of the referee being an absolute moron.

Manchester’s Anthony Taylor couldn’t handle a single thing all game long, lost control long before the 85th minute and bottled every major decision, including an obvious disallowing of their ‘goal’.

Klopp kept faith with the 4-4-2 but more importantly made the big calls which were needed: Mo up top, Gomez for pace at centre-back, Fabinho back into the side.

He got everything right, not just in the team but in the buildup – the players were full of massive cojones, full of running, full of everything we needed.

Bold subs paid off too.

This is Liverpool, this is our team, this is what we need to see every game.

We’ve found the standard now we’ve got to set it every game. As Jurgen has said, consistency is now needed.