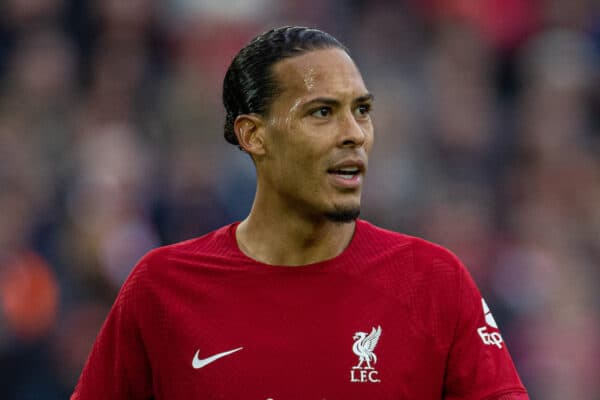 There were outstanding individual displays galore in Liverpool’s epic 1-0 victory against Man City on Sunday, with one Red narrowly standing out above the rest.

Jurgen Klopp‘s men were relentless at Anfield, seeing off the Premier League champions on a thrilling afternoon.

Mohamed Salah‘s solitary strike proved to be the difference between the two teams, with the Egyptian netting a brilliant solo effort.

It was a win that feels like it could be a season-changing one for Liverpool, as they stood tall and delivered under pressure.

Here we compare our player ratings with those of the Liverpool Echo, iNews, WhoScored, FotMob and the This Is Anfield readers.

Interestingly, it was actually Alisson (8.6) who got the highest average rating at Anfield.

The Brazilian was certainly a reliable figure between the sticks, making one big save to deny Erling Haaland and proving to be a calm presence.

TIA’s Mark Delgado made sure to point out Alisson‘s “fantastic” assist for Salah’s goal, which brought back memories of the Egyptian’s strike against Man United in 2019/20.

Ian Doyle of the Echo described the goalkeeper’s save to deny Haaland as “excellent,” as his vast influence shone through.

Hot on his heels was Joe Gomez (8.5), who excelled at centre-back against incredibly strong opponents.

Joe Short of iNews hailed the Englishman’s magnificent performance, claiming he was “back to his best” alongside Virgil van Dijk.

The Dutchman (8.3) and Salah (8.3) were in joint-third place, with both immense in their own way.

The former was “much more tenacious and diligent” than he has been this season, according to Delgado, while Short said that the latter’s hat-trick at Rangers has “worked wonders.”

This wasn’t a day to focus on poor performances because there simply weren’t any, but Fabinho (7.2) got the lowest average, still playing superbly, though.

The games keep on coming thick and fast for Liverpool, with the visit of West Ham on Wednesday night (7.30pm UK) up next.