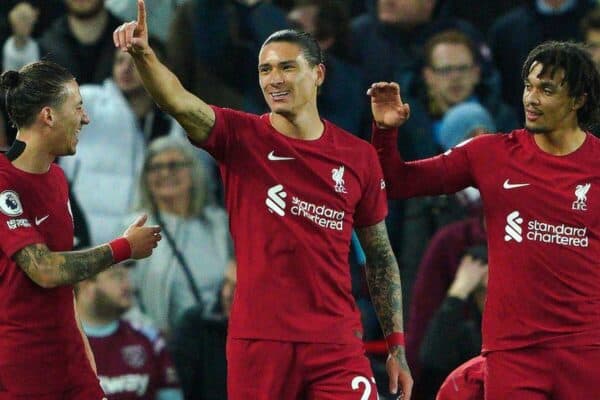 Darwin Nunez scored his first Anfield goal for Liverpool as they earned a 1-0 victory over West Ham, with Alisson‘s heroics helping them over the line.

Challenged to find consistency after two big victories, Liverpool took control from the start as they welcomed West Ham to Anfield, with the first half defined by Nunez’s urgency.

The Uruguayan pressed and harried fervently up against a struggling back line, showing the off-ball work ethic required to lead the line in Jurgen Klopp‘s 4-4-2.

At a windy Anfield, there was an unpredictability in the long balls, but Thiago‘s was inch-perfect as he teed Nunez up for a brilliant first-time volley on the charge, just tipped over by Lukasz Fabianski.

Fabianski could do nothing soon after, though, when Kostas Tsimikas whipped in a cross and the No. 27 produced a fine downward header to make it 1-0.

Another big chance came straight after, this time stopped by Fabianski, while later on in the half, a chest and volley from Nunez left the post rattling.

West Ham should have gone into half-time level, after Joe Gomez brought Jarrod Bowen down in the box, but up stepped Alisson to deny the winger and maintain Liverpool’s lead.

Liverpool remained in charge as the second half got underway, with Jordan Henderson going close with a curler from outside the box, the shot just sailing over the bar.

A triple change came before the hour mark, with Curtis Jones among those to come on, making his first appearance of the season proper as Klopp kept one eye on Saturday’s trip to Nottingham Forest.

It brought an opportunity for Mohamed Salah to move back up front, though it was his foil, Roberto Firmino, who almost added a second minutes later, his close-range effort diverted wide.

In truth, the substitutions spoiled the momentum for Liverpool, giving West Ham more opportunity to build attacks, with Said Benrahma forcing a comfortable save from Alisson.

A brilliant Henderson cross led Kurt Zouma into a desperate block that ended up bouncing onto the crossbar, while at the other end James Milner somehow denied Tomas Soucek to secure the three points.