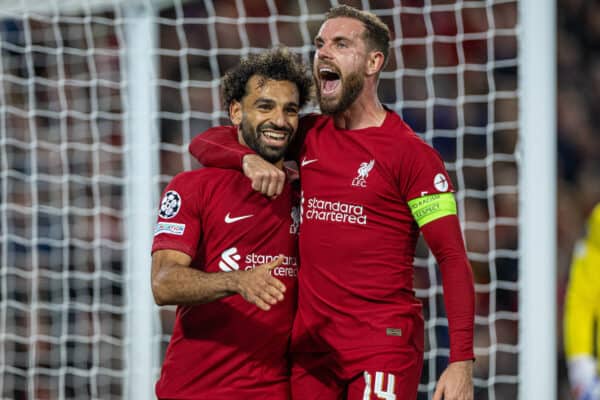 On their first-ever competitive meeting with Rangers, a new-look Liverpool side earned a 2-0 victory that keeps them on course for progress in the Champions League.

After admitting change was required before the game, Jurgen Klopp satisfied calls for a shift in system as he fielded all four of Luis Diaz, Diogo Jota, Mo Salah and Darwin Nunez at Anfield.

It led to a free-flowing attacking game from Liverpool, with Nunez drawing an early save from 40-year-old goalkeeper Allan McGregor, with his movement impressive up front.

Another player with doubters to address gave the Reds a spectacular opener, with Trent Alexander-Arnold stepping over a free-kick and firing it into the top corner in the seventh minute.

Liverpool should arguably have ended the first half with at least one more, only for an inspired performance from McGregor to deny Nunez and Diaz on multiple occasions.

His best save came on the cusp of half-time, diving low and blocking a goalbound effort from Nunez with his legs to keep the score at 1-0.

If Giovanni van Bronckhorst was clinging to a marginal scoreline at the break, the Rangers manager will have been left deflated as Liverpool came out of the blocks fast again.

Less than 10 minutes into the second half, a twisting run from Diaz into the penalty area saw the Colombian brought down by Leon King, allowing Salah to step up and convert from the spot.

With Liverpool in control, Klopp made a double change as Fabinho and Roberto Firmino came on for Jota and Jordan Henderson, with it telling that the manager stuck with his new 4-2-3-1.

So, too, when Harvey Elliott replaced the sadly goalless Nunez – who produced a decent display on his first Anfield start – with the teenager heading to the right wing and Salah shifting up front.

Though they are unlikely to enjoy as comfortable an evening on Sunday when they visit Arsenal in the Premier League, this 2-0 victory over Rangers could serve as the ideal preparation as Liverpool settle into second place in Group A.