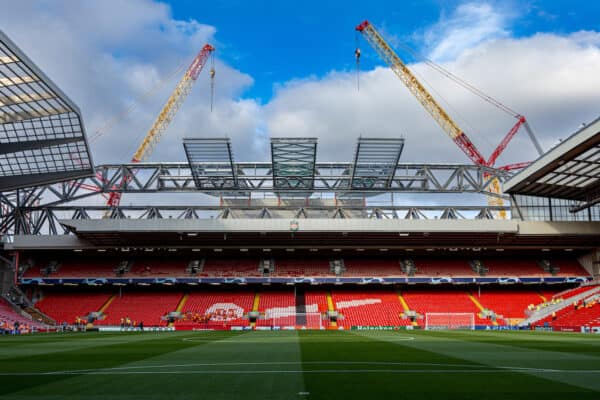 Liverpool have confirmed the next phase in the expansion of the Anfield Road End, with a major renovation to the stand’s roof during the World Cup.

The redevelopment of the Anfield Road End is well underway, with the scale of the project now visible during matchdays.

The project, which will cost the club an estimated £80 million and add 7,000 seats to the stand, is on course for completion ready for the 2023/24 campaign.

Work began on September 30, 2021, and has continued, weather permitting, over the past 13 months.

And with the schedule set to be paused for the winter World Cup in Qatar – and therefore no games to be played at Anfield from November 13 to at least December 19 – contractors will move into the next phase during the tournament.

Liverpool have announced that the existing roof of the stand will be removed and replaced by a brand new one, 75 metres wide and 39 metres high.

The old truss will be taken away and the roof demolished, with the new roof in place above the historic structure, as part of an expansion that will join onto the existing stand.

Two cranes will be brought into the stadium via the corner between the Sir Kenny Dalglish Stand and the Kop, with the club assuring there will be no damage to the pitch.

* Visualisation of the completed stand.

Liverpool have, however, warned that “there is a possibility that a very small section of home and away fans located at either end of the stand could be exposed to any inclement weather for a brief period of time.” For those affected, wet-weather ponchos will be provided by the club.

“There may be no games at Anfield during the World Cup, but there’s no pause in our ambitious Anfield Road expansion plan,” Paul Cuttill, VP of Stadium Operations at Liverpool Football Club, said.

“We’re really excited to hit another huge milestone in this ongoing build, with the removal of the current roof and the building of a brand new one.

“When our fans return to the stadium after the World Cup break, they’ll see a significant difference and a clearer vision of Anfield’s exciting new future.”