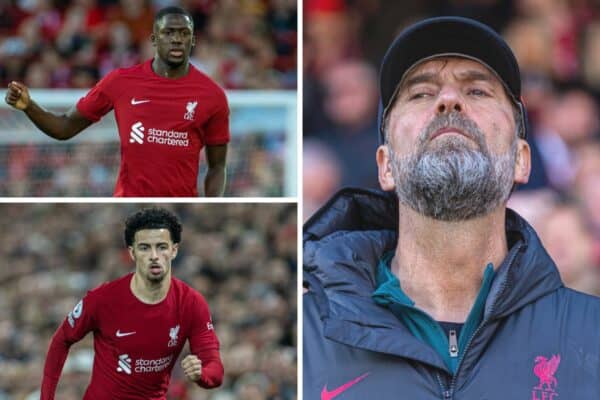 Liverpool lineups vs. Napoli with Konate & Jones in contention

Jurgen Klopp may have originally planned to make wholesale changes for Liverpool’s final Champions League group game against Napoli on Tuesday, but knows his team are now in desperate need of a positive result following Saturday’s defeat to Leeds.

Luciano Spalletti’s side were 4-1 winners when the two sides met at the Diego Armando Maradona Stadium in September, and remain unbeaten in Serie A and in the Champions League this season.

Having won all four of their group games since that defeat in Naples, Liverpool have already booked their spot in the knockout stages, but know they must win by four or more goals on Tuesday to qualify as group winners ahead of Napoli.

Considering the two teams’ contrasting form, that would seem unlikely, so it will be interesting to see how Klopp approaches this game in terms of team selection.

This will be the 10th match the Reds have played since reconvening after the September international break, with less than two weeks until their campaign grinds to a halt for the World Cup.

Given their intense schedule, and the fact Liverpool have already qualified, Klopp may want to rotate his squad for this fixture, but can he really afford to risk another embarrassing result at Anfield?

Here, we look at two ways Liverpool could line up on Tuesday night.

From Klopp’s pre-match media duties on Monday, we know the following:

Following Liverpool’s miserable defeat to Leeds, Klopp said he felt some members of his squad had been “overplayed” this season.

But speaking to reporters on Monday, he added that this would not be a game for “massive rotation,” given Napoli’s excellent form this season.

One player who looks likely to come in is Ibrahima Konate, who Klopp says has a “good chance” of playing having recently returned from injury.

James Milner was the player put forward for media duties on Monday, which is often an indication that he will be playing the following day. Trent Alexander-Arnold could be most likely to make way for the Yorkshireman.

Taking those things into consideration, could Liverpool’s XI look like this vs. Napoli?

If those are the changes Klopp goes with, this would be the XI:

Given how little protection the midfield three offered the defence against Leeds, it would be no surprise to see Klopp revert to the double-pivot that worked well at times in October.

Fabinho has looked way off the pace this season and is due a rest, while Kostas Tsimikas is another option for Klopp to consider.

Fabio Carvalho was unfortunate to not come off the bench against Leeds and is another who could play, should Roberto Firmino be given a game off.

If Klopp decides to move away from the diamond formation, the team could look like this:

That would see the Reds line up as follows:

Plenty to ponder, then, for Klopp and his coaching staff.

In Monday’s press conference, less than 48 hours on from the defeat to Leeds, he claimed he wasn’t sure which of his players would be available to take on Napoli.

The tight turnaround will definitely play a part in his team selection, and although he wouldn’t admit it, the boss is also likely to have one eye on Sunday’s clash with Tottenham, a game the Reds can’t afford to lose if they’re serious about achieving anything in the Premier League this season.