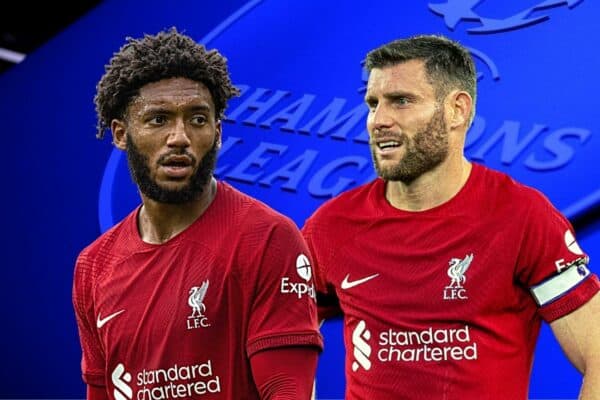 Liverpool lineups vs. Rangers with Joe Gomez or James Milner at right-back?

Liverpool were struck with three injuries from their last game and changes now beckon, but just how many will Jurgen Klopp end up making and who starts at right-back?

The Reds stuck with their 4-4-2 formation for the trip to Arsenal, one that again highlighted the desperate need to find a solution for a leaky defence after a 3-2 loss.

The defeat was compounded further by a trio of injuries to key players, leaving Klopp to question if he will persist with the system change after losing “one important part of it.”

Liverpool still have the personnel to persist with the change and it will certainly keep fans and Rangers guessing before the team is announced.

With injuries, form and rotation to consider, Liverpool’s lineup is not a straightforward one to predict.

The Reds have been hit three times over as the injury woes continue, just when we all thought we could see the light at the end of the tunnel.

Fortunately, two Reds have returned to training to somewhat offset the pain of losing two defenders and an attacker:

Prior to the game at Arsenal, Klopp explained that “we will have to make them for the next game” with only three days separating the two games.

There are to be three enforced changes but it could be a total of five against Rangers, with fresh faces needed after successive starts, especially in midfield – with Thiago starting the last four and Jordan Henderson the last three.

With Alexander-Arnold injured and Calvin Ramsay absent from training, James Milner and Joe Gomez are the ones of the right-back shortlist.

A decision will need to be made if Liverpool are persisting with the 4-4-2, and if they are, it could well be a case of being all-in for the attack as the team needs a victory in Scotland:

The five changes to the XI have Liverpool lining up like this:

Liverpool’s latest injuries have thrown an untimely spanner in the works with the squad in a delicate spot regarding rest and rotation, namely for Van Dijk and Salah (1,080 and 1,031 minutes respectively this season).

The pair will need a rest at some stage but that may not be possible for this fixture, while there is a chance the club now err on the side of caution with Konate after two months out.

And a chance could befall both Harvey Elliott and Fabio Carvalho in midfield should a change back to 4-3-3 be made:

Those tweaks would see the Reds set up as follows:

Injuries have taken away key options but you can certainly see Liverpool persisting with their system change, one that did reap its rewards when the teams met last week.

All three points here will leave the Reds needing just one point from their trip to Ajax to secure a place in the last 16, which would then offer flexibility in the final group game against Napoli.