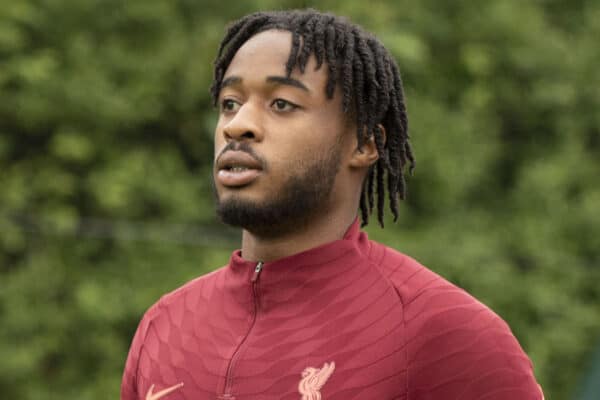 Liverpool youngster James Balagizi has returned to Merseyside following surgery on his groin, putting a pause on his loan spell with Crawley Town.

Balagizi made a bright start to life at Crawley, starting nine of a possible 11 games for the League Two club with a brace against Northampton Town and a goal against Fulham in the League Cup.

But it was confirmed earlier this month that the 19-year-old had made his way back to the AXA Training Centre having suffered an unspecified injury.

He subsequently missed clashes with Grimsby and Newport County, undergoing tests at his parent club before a decision was made on the best course of action.

Crawley have now revealed that Balagizi underwent surgery on his groin last week and is now expected to miss at least five weeks.

That time will be spent with Liverpool, receiving elite-level treatment from the club’s medical staff, before he is then permitted to return to Crawley and resume training.

It comes at an uncertain time for the West Sussex club, who parted ways with manager Kevin Betsy following the 3-0 defeat to Grimsby, appointing Lewis Young as interim replacement.

Whether that has any bearing on Balagizi’s future remains to be seen, with Betsy having been influential in bringing the teenager to Broadfield in the summer.

The midfielder had previously worked with Betsy in the England youth setup, with the coach citing his “connections” when lauding Crawley’s transfer coup.

“We had no right really to be signing a player of his quality,” he said back in August.

Unlike the Premier League, the fourth tier will not take a break for the World Cup, meaning Balagizi should be back on the pitch by December, which kicks off with the visit of Swindon Town.

He is not the only Liverpool loanee whose situation has been impacted by managerial change, with Max Woltman seeing Doncaster manager Gary McSheffrey sacked on Monday.

The Doncaster board cited a “lack of progress between games” for McSheffrey’s exit, having seen their targets for a “particular style of play and overall identity” not met.

Woltman had made his first start for Rovers in McSheffrey’s final game, a 3-0 loss to Carlisle at the weekend, having been named Man of the Match after coming off the bench in the previous 1-1 draw with Leyton Orient.

The hope is that any incoming manager will recognise the Liverpool forward’s quality and how he would fit into the “entertaining and attacking approach” that Doncaster are looking for.