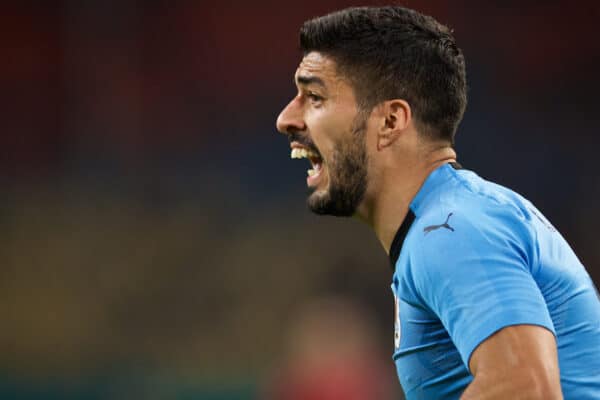 Luis Suarez fulfilled a dream on Sunday night, when his brace helped Nacional to victory over the other Liverpool to clinch the Uruguayan title.

Suarez made an emotional return to Nacional, the club he began his career with, in July, after the expiry of his contract with Atletico Madrid.

The 35-year-old rejoined the Montevideo outfit on a short-term deal, turning down offers from MLS as he set his sights on a shot at success in his native Uruguay.

That came on Sunday, when a 4-1 win over local rivals Liverpool Montevideo secured the Uruguayan Primera Division title, with Suarez scoring twice.

Having already finished clear of Liverpool at the top of the aggregate table – with the league setup very different to in England – Nacional were declared champions without the need for a playoff final.

Suarez scored the opener in the 50th minute, before an equaliser from Thiago Vecino sent the game to extra time, only for another Suarez goal and two from Emmanuel Gigliotti to seal the win.

It may have come in Suarez’s final game for the club, too, with his deal at Nacional due to expire at the end of their season.

He will therefore be a free agent after the World Cup, with the veteran striker already admitting that a move to MLS may now be a possibility.

Suarez featured 16 times upon his return to Nacional, scoring eight goals and laying on three assists, playing a vital role in their dominant campaign and qualification for the Copa Libertadores.

That his final game came against Liverpool added another quirk to a captivating tale, having spent three-and-a-half years with their namesake in the Premier League, scoring 82 times and assisting 47 in 133 appearances.