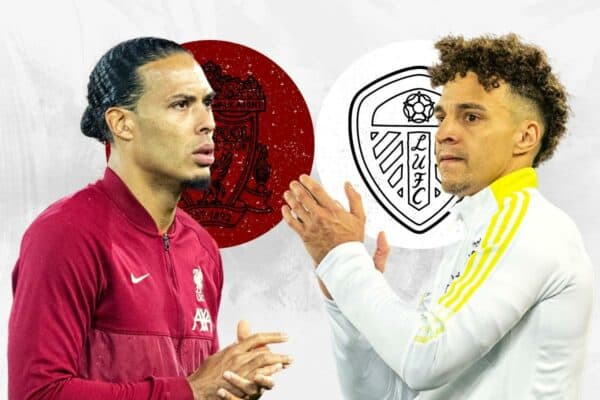 Liverpool and Leeds do battle at Anfield this weekend, with a poor result for the visitors only to pile further pressure on manager Jesse Marsch.

The Reds host the Whites in the Premier League on Saturday night, looking to bounce back from the wretched defeat at Nottingham Forest.

Jurgen Klopp‘s men will come up against a Leeds desperately struggling for form, with pressure now mounting on manager Marsch after four successive defeats.

With kickoff nearly upon us, we spoke to Leeds fan Freddie Smith (@fbsmith3) to dissect a tough season for both teams and discuss Saturday’s game.

How happy, or disgruntled, are you with Leeds’ start to the season?

Leeds had a very decent first three games, picking up seven points from a possible nine, but since then it hasn’t been good at all.

We’re winless in our last eight matches and making mistakes at pivotal moments.

Most Leeds fans would say they’re not particularly happy with how the season has begun and who could blame them?

Is it time for a new manager? Or show faith in Marsch?

I think the next three matches before the winter break will determine what the board decide to do with Jesse Marsch.

The majority of fans would say that it’s time for a change; we’re currently playing without any clear cohesion and appear one-dimensional in terms of the style of play Marsch is adopting.

After we face Liverpool, we host Bournemouth at Elland Road before travelling to Tottenham.

Three points from those games is the minimum tally required.

Leeds’ best players have been Brenden Aaronson, Tyler Adams, Luis Sinisterra and Marc Roca, all of which were signed in the summer window.

They have adapted immediately to the rigours of Premier League football and have definitely improved our midfield.

Patrick Bamford has struggled after such a long period of time out injured, missing lots of gilt-edged opportunities, and Diego Llorente and Junior Firpo are far too erratic and prone to errors.

Liverpool have had a bit of an indifferent start, and to date, have performed below their usual standards.

I believe the departure of Sadio Mane has had a big impact and coupled with injuries to key men, they have struggled to find their groove so far this season.

For the first time in a few years, it’s somewhat difficult to predict where Liverpool will finish.

I believe they will be in the top four come the end of the campaign, though, and will finish in third place, behind Manchester City and Arsenal.

Which Reds player who you most like to have at Leeds currently?

We are in desperate need of a striker, so I’d have to say a fully fit and firing Diogo Jota. He’s a fantastic player and offers so much energy and quality in the final third.

He would thrive off the service that Aaronson and Sinisterra provide for Leeds.

I’m also a big admirer of Harvey Elliott; he’s a class player and destined for a hugely successful career.

Leeds need to stop Trent Alexander-Arnold and Andy Robertson from dictating out wide.

Playing a narrow 4-2-3-1 in possession means we can often be vulnerable in the wider areas of the pitch, and allowing the aforementioned full-backs to provide service off of the flanks could result in a long night.

Otherwise, as is often the case in the Premier League, the battle in central midfield will play a key part in determining how the game pans out.

I’ll go with a comfortable 2-0 win for Liverpool.

Defensively, Leeds are making way too many mistakes and not showing a clinical edge down the other end of the pitch.

I would snap your hand off for a 0-0 draw right now.