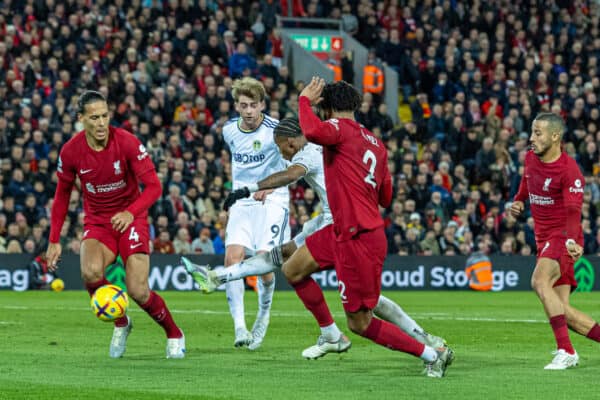 There was concern in the air from the watching media after Liverpool fell to a shattering 2-1 defeat to Leeds at Anfield.

Where on earth do the Reds go from here?

Jurgen Klopp‘s men suffered arguably their most damaging result of the season to date on Saturday, losing to a relegation-threatened Premier League side for the second weekend in a row.

Rodrigo and Mohamed Salah shared first-half goals before Crysencio Summerville stunned Anfield with a tidy finish in the 89th minute.

Here’s how the media reacted to Liverpool’s latest awful result.

Some were at a loss after the Reds’ defeat…

The Mirror‘s Tom Blow bemoaned a mistake-laden showing by Liverpool:

“It’s fair to say Liverpool’s Premier League campaign hasn’t gone to plan so far. Heading into Saturday night’s game, they had won just four of their first 11 fixtures and lost 1-0 to basement boys Nottingham Forest at the City Ground in their previous outing.

“The Reds couldn’t afford any more slip up against Leeds, but Klopp didn’t get the memo. The German comically slipped on his way to the dugout before kick-off. Thankfully he was OK, but it wasn’t the last mistake a Liverpool employee would make on Saturday night.

“Just four minutes into the game, Joe Gomez played a back pass to Alisson without looking where the goalkeeper was. As it turned out, Alisson wasn’t in his six-yard box and slipped as the ball rolled into the path of Leeds striker Rodrigo for the easiest of goals.”

Last 7 PL matches, #lfc are basically an even XG team (Created 11.5, Conceded 12.2)
There is absolutely no basis for good results so unsurprisingly we are W2 D2 L3 in those 7.
Attack is decent enough but defensive performance is bona fide relegation level.

“A campaign which promised so much is turning into a nightmare for Liverpool, and here it reached its lowest point yet.

Their proud unbeaten Premier League record at Anfield, which stretched back 29 games and 19 months, is gone, taken away by a Leeds side which started the day 19th in the table. Jesse Marsch’s men picked up their first win in eight matches courtesy of Crysencio Summerville’s 89th-minute strike to silence home fans with a 2-1 result.

“Only seven days before, the Reds had lost to Nottingham Forest, who occupy 20th place.

“It’s a hard-to-fathom run of poor form that has the team desperate for answers.”

Ian Doyle of the Liverpool Echo claimed that last season feels like a lifetime ago:

“How Liverpool must wish they could turn the clocks back a lot further than just an hour this evening.

“Never has the quadruple-chasing thrill ride of last term seemed so far, far away for Jurgen Klopp and his players after a troubling season slumped to a new, shocking low.

“Defeat to Leeds United, a team in the relegation zone and who had been kept off the bottom only by goal difference, was bad enough.

“The manner of this pathetic setback will cause the greatest alarm, Liverpool appearing clueless for the most part while offering two gift-wrapped goals for the visitors at either end of the match.”

The Mirror‘s David Maddock is finding it all a pain experience currently, following last season’s heroics:

Liverpool have forgotten how to control matches, how to dominate opponents. And they've replaced it with a desperation bordering on the shambolic.

It's actually quite painful to watch the unravelling of a team that was within touching distance of greatness.#LFC

Others pondered over genuine question marks about Klopp and the team…

“The only way is up for Leeds. Liverpool’s path forward is more uncertain. They have now lost to the league’s bottom two clubs in successive matches and are marooned in mid-table.

“As their fans stormed out of the ground, they smashed their fists on the walls in furious impotence. This is not the Liverpool of old. This is a Liverpool that runs down blind alleys and misplaces passes and loses its men and scuffs its shots.

“And most worryingly for Jurgen Klopp, the evidence of this match showed that Leeds played as if they were hungrier than Liverpool.

Richard Jolly of the Independent now wonders if a top-four finish is even out of the question:

“This was Liverpool’s first home defeat in 30 league games, a first with fans present since 2017.

“And, while it is sandwiched by the achievement of reaching the Champions League’s knockout stages, it made this a dreadful week on domestic duty.

“Defeats to Nottingham Forest and Leeds, each kicking off in the relegation zone, make it less likely Liverpool will have Champions League commitments again next season.”

“Would missing out on the top four be a doomsday scenario for Liverpool? We may soon find out.

“The Reds knew a win here was paramount if they were to keep pace with the sides who are threatening to run away from them at the top of the table.

“Chelsea slipped up on Saturday, but Spurs pinched a late win at Bournemouth, meaning Liverpool simply couldn’t afford to fluff their lines. They did.

“Defeat leaves them eight points adrift of fourth place, and facing a trip to the Tottenham Hotspur Stadium next weekend.

“Lose there, and it could be curtains.”