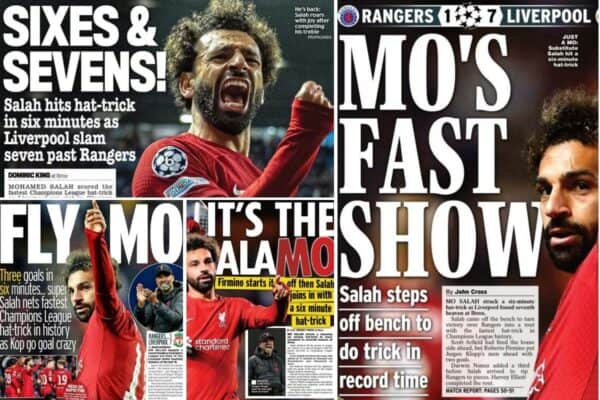 The watching media spoke of the timely nature of Liverpool’s stunning 7-1 win over Rangers, with some much-needed positivity on show.

Jurgen Klopp‘s men took advantage of a Rangers side that capitulated during the second half of their Champions League clash at Ibrox, scoring six times after the break.

Roberto Firmino and Mohamed Salah scored five times between them, while Darwin Nunez and Harvey Elliott also got in on the act.

It was a highly valuable win for the Reds, both in the context of their Group A chances and their current confidence levels, in what was hopefully a season-changing evening.

Here’s how the media reacted to Liverpool’s victory.

“Jurgen Klopp’s side have been battered from pillar to post of late, but they gave their supporters a night to remember in Glasgow, coming from behind to smash Rangers 7-1 at Ibrox.

“A significant win, in more ways than one. One more point will see the Reds safely into the Champions League knockout stages for the sixth successive season, for starters, but what this victory may do for their confidence is equally important.

“This was as convincing a performance as they have delivered in some time.

“All in all, a hugely positive night for Klopp and his side, who may just have rediscovered some form at the right time, with Manchester City visiting Anfield this weekend in the Premier League.”

The Telegraph‘s Sam Wallace described it as a “remarkable” result:

“This might not have been against one of the great sides of the Champions League, but it was at one of European football’s great stadiums.

“When the goals suddenly came in an astonishing avalanche – four in the last 15 minutes of the game including one for the teenager Harvey Elliott – it changed the mood around Klopp and Liverpool entirely.

“Seven goals away at Ibrox is – for all the inequalities of Premier League and its Scottish cousin – still a remarkable turnaround.

“In the context of Liverpool’s listless first half that was even more the case. They had been spectacularly mediocre by half-time when they went in level with Rangers, with the home crowd upbeat and more of the action in the penalty area of Liverpool’s goalkeeper Alisson.

“Now they face Manchester City on Sunday with a very different perspective on life.”

The Mirror‘s Tom Blow loved what he saw from the dazzling Brazilian:

“Liverpool needed a response – and Firmino provided it.

“The Brazil international, who has scored six goals and produced three assists in seven Premier League games this season, held off Rangers captain James Tavernier to nod in Kostas Tsimikas‘ corner. Game on.

This Is Anfield‘s Mark Delgado was also gushing with praise for Bobby:

“Who had Bobby Firmino joint-top scorer in mid-October? Two on the night, his first in Europe since Benfica in last season’s quarter-finals, put him on eight for the season.

“He’s a man in form in front of goal, showing really good movement outside the box and a big willingness to break into the six-yard box at every opportunity.

“Moreover, his link play with the pair on the sides was good and the attacking threat from Firmino never comes at the expense of his work rate outside the area.

“It was a surprise when he was left out against Arsenal last weekend in truth; he might have come in here because of injuries and rotations but it’s still a brave person who would bet that our No. 9 doesn’t start against City.”

“Perhaps the key to getting the best out of Mohamed Salah is to drop him.

“Omitted then unleashed, the Egyptian warmed up for Manchester City with the fastest treble in Champions League history.

“In six minutes and 12 seconds of magical mayhem, Salah served a reminder of his brilliance. Rangers may consider themselves unfortunate to have faced him at his rapacious, rampant best, but a game in which Liverpool trailed ended up as a rout, Salah coming off the bench to seal their belated first away win of the season in spectacular style.”

“No starting place? No problem! Mo Salah could have been the headline-grabber for all the wrong reasons here, left out of Klopp’s XI having been substituted in the defeat to Arsenal on Sunday. Signs of decline, perhaps, in the relentless Egyptian?

“Erm, no. On he came, 68 minutes on the clock and Liverpool leading 3-1. Within seven minutes he’d scored, and just over six minutes later he had bagged a historic hat-trick.

“They were great finishes, too. Rangers may have given up the ghost – their final half hour was little short of disgraceful – but this was exactly what Salah, and Klopp, wanted. What they needed.

“The Egyptian King is back on his throne. City be warned.”

So are Liverpool actually ‘back’?

Dominic King of the Mail argued that this could prove to be a turning point in the Reds’ campaign:

“It had been hard work in Glasgow, too hard at times, but Darwin Nunez had just scored Liverpool’s third goal and Klopp knew that a huge step towards the Champions League knockout stages had been taken — one point from their final two games and last season’s finalists will be in the last 16.

“Klopp enjoying himself? There hasn’t been much chance to do that of late, but now he could and what followed before the end was something incredible — with Mo Salah coming off the bench to score the fastest hat-trick in Champions League history.

“Might this be the night that things change for the better?”

Meanwhile, Delgado was of a similar mindset:

“It won’t count for much in the eyes of some because of the opposition, because it’s not in the Premier League and because we’re too inconsistent game-to-game, but improvement has to start somewhere.

“It may as well start with a 7-1 thrashing, Rangers’ heaviest-ever competitive defeat and a massive step towards European football in the new year, right?!

A big, big game on Sunday, with confidence boosted and no new injuries. It couldn’t have gone any better in Glasgow.