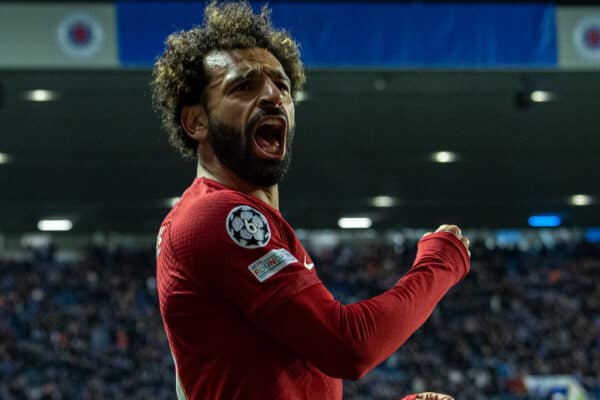 Mohamed Salah came off the bench to make sure of Liverpool’s victory over Rangers, with his hat-trick in the 7-1 win making Champions League history.

Salah was one of six players to drop out of the side as the Reds arrived at Ibrox, with Jurgen Klopp shuffling his pack during a ridiculously busy October.

The No. 11 was eventually introduced with 67 minutes on the clock and the score already 3-1, and within 15 minutes of coming on he had netted three times.

Six minutes and 12 seconds elapsed in the time it took him to net his first, second and third, making him the scorer of the fastest-ever Champions League hat-trick.

The previous holder was Bafetimbi Gomis, who struck three times in seven minutes on his way to a four-goal haul in Lyon’s own 7-1 win over Dinamo Zagreb in 2011.

And he is only the third substitute to score a hat-trick in Liverpool’s history, following Steve Staunton (1989) and Steven Gerrard (2010).

His overall tally is now 164 goals in 267 games for the Reds, the club’s eighth-highest goalscorer ever, pushing him further away from Michael Owen (158) and within eight of Kenny Dalglish (172).

It was a welcome cameo from the 30-year-old, who is now on eight goals for the campaign but has often struggled to impose himself as Liverpool endure a miserable run of form.

The hope is that this hat-trick is the start of a blistering spell from Salah, with Man City next up in the Premier League.