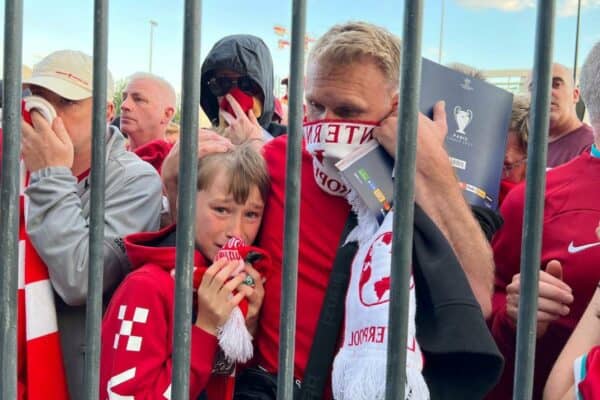 The report also suggests UEFA’s “egregious failures” led to thousands of supporters being caught up in severe congestion on the approaches to the Stade de France and those who reached the ground being forced up against the perimeter fence as ticketing and turnstile problems caused huge bottlenecks.

In addition to being targeted with violence by local gangs ahead of the showpiece between Liverpool and Real Madrid in the French capital on May 28, Paris police also used tear gas on supporters waiting to get into the venue and on those in the fan zone several miles away.

A panel led by Professor Phil Scranton, who also led the Hillsborough Independent Panel into the 1989 disaster in which 97 Liverpool fans died and has been an advocate for the affected families, has produced its own report based on 485 eyewitness testimonies – two thirds of which mention fearing for their lives on the night.

“Persistent, random police assaults on fans, and unprovoked deployment of tear gas on men, women and children trapped in confined spaces, was reckless and dangerous. It constituted criminal assault,” states the report.

“The hostility of the police prior to the match (at the Fan Zone and stadium approaches), during (in the stadium) and after (at the stadium, the stations and in the City) demonstrated a collective mindset which resulted in breaches of criminal law.

“At the Stade de France there were egregious failures on all aspects of UEFA’s responsibility for stadium safety.

“Sustained failure in crowd management severely compromised the health and well-being of fans.

“It is clear from fans’ statements that they were put at risk by aggressive policing, ineffectual safety measures and a failure to implement comprehensive stadium safety management plans based on risk management principles.

“Grounded in their understanding, and for some direct experience, of the Hillsborough disaster, Liverpool fans prevented a fatal tragedy occurring through their collective action.”

The report stated the organisation of the final showed a lack of coordination between the different actors involved and with the Rugby World Cup and 2024 Olympics to be held at the Stade de France, which was awarded the event in February after St Petersburg was stripped of the event, the concern was the “multiple malfunctions” they identified, and the presence of local criminal gangs, were likely to occur again.

Some of the reports key findings identified aggressive policing, inadequate provision for crowd safety and event management and fans being left traumatised by unprovoked assaults by police and local gangs.

“It is difficult to comprehend the sequence of events that constituted the debacle in Paris, leaving so many people physically injured, psychologically harmed and financially compromised,” said Scranton, Professor Emeritus, School of Law at Queen’s University Belfast.

“Men, women and children were subjected to unprovoked, indiscriminate police violence including tear gas and baton assaults, together with robbery at knife-point by local gangs.

“Many left before the match, those who stayed were subjected to further attacks by riot police and gangs on leaving the stadium and arriving at local stations.

“Responsibility for the collapse in authority, management and safety, lies with those organising and administering the event.”

UEFA, whose own independent report into the scenes which saw kickoff delayed by 38 minutes despite large numbers still being stuck outside will be published next month, have been contacted for comment.