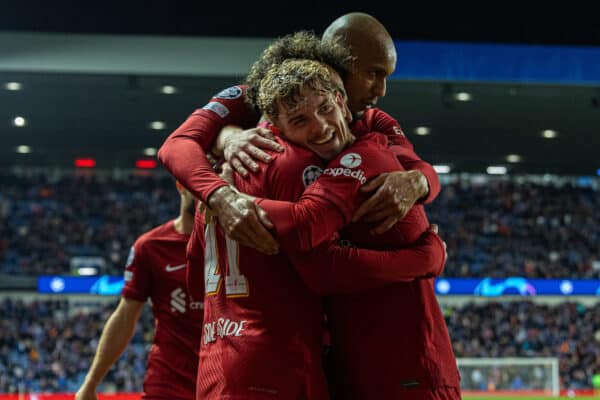 Rangers 1-7 Liverpool: Reds turn on the style in confidence-booster

Liverpool survived an early scare to produce an emphatic win at Rangers, with Roberto Firmino inspiring a 7-1 triumph to edge towards the last 16.

Taking to the field with six changes from the weekend but retaining their 4-4-2 shape, Liverpool came up against a game Rangers side, who knew nothing but a win would do.

It showed in the early stages as the hosts battled for second balls and attacked with verve, and Rangers took the lead after 17 minutes as a simple pass cut the defence open and Scott Arfield finished brilliantly.

Liverpool restored parity soon after, and it was no surprise that it came through Firmino, who simply nodded home at the front post from a Kostas Tsimikas corner – his seventh goal of the season.

The goal gave the Reds fire, but Rangers still pushed them hard, with Ryan Kent inspired on the left flank and Arfield only denied a second by a huge Ibrahima Konate block.

An injury to centre-back Connor Goldson at the end of the first half forced Giovanni van Bronckhorst into sending on 18-year-old Leon King alongside Ben Davies.

The second half began in very much the same vein, with Liverpool’s main outlet being hopeful balls through for Darwin Nunez, who aimed to provide a presence up front.

Harvey Elliott was a real positive, with his vibrancy picking up the ball on the right flank, showing more urgency than the majority of his team-mates as the Reds searched for another goal.

The goal came, unsurprisingly, through Firmino, who surged into space to coax a perfect cross from Joe Gomez and slide home past Allan McGregor for 2-1.

McGregor’s skewed clearance led to a third for the Reds, with a fine pass from Fabio Carvalho and a rabona flick from Firmino allowing Nunez to place it into the far corner.

On came Andy Robertson, Thiago, Mo Salah and Diogo Jota, and the latter pair combined three times in six minutes as Salah netted a stunning hat-trick with three assists from the No. 20 – the fastest-ever Champions League hat-trick.

To cap a stunning victory, there was a first Champions League goal for Elliott, hammering home after McGregor had swept away Jota’s effort for 7-1.

Three points leaves Liverpool needing to just avoid defeat at Ajax on October 26 to guarantee progress to the last 16, with Napoli having already qualified.