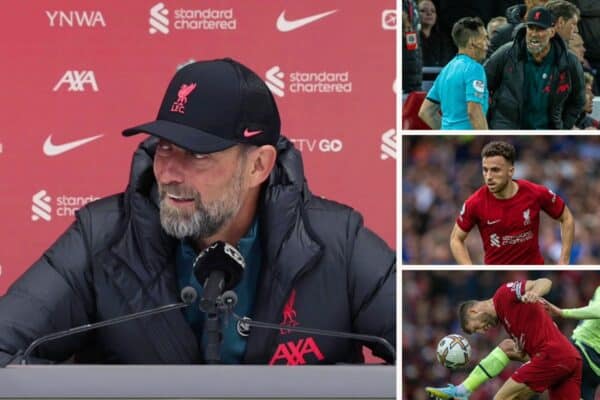 Here are five key points from Klopp after a huge win for Liverpool:

Klopp was sent to the stands following his reaction to the referee’s failure to award a foul against Bernardo Silva on Mo Salah.

He has no complaints about the decision, admitting he “went over the top.”

But after the game, the boss was still in disbelief at the Anthony Taylor’s decisions throughout the game.

“Red card, my fault,” he admitted.

“I went over the top in the moment and I don’t think I was disrespectful to anybody but when you look back at the pictures, I know myself for 55 years and the way I look in these moments is already worth a red card. Who cares what I say?

“I lost it in that moment and that’s not okay, but I would like to mention, how can you not whistle that foul? How on earth is it possible? I wish I would get an explanation.”

“That was the moment when I snapped”

Both Klopp and Pep Guardiola were not happy for the same reasons after the game. With Taylor’s performance in the middle very much in the spotlight.

Klopp described the moment a foul was not given against Bernardo as “the moment he snapped.”

“During the game we agreed completely that Anthony Taylor just let things run. Why would you do that? Both teams.

“But I heard now that people said it was Anfield that made the VAR decision. The foul on Mo? Anfield had no chance!

“I just had the perfect view. The linesman. You can imagine, you’re 1-0 up and you either get a free-kick there or a counter-attack there.

“There’s pretty much a 100 percent difference. That was the moment when I snapped. I’m not proud of that but it happened.”

This was Mo Salah at his very, very best.

Klopp’s decision to deploy the Egyptian in a central attacking role very much paid off, and the boss was keen to heap praise on the Reds’ talisman after the game.

“He was one of two strikers in the centre, together with Bobby, great. An absolutely top performance.

“The goal was world class. Top class goal. The situation before was unlucky. Really unlucky that he didn’t score there already. Apart from that, good on the ball, a constant threat in behind, working extremely hard. Outstanding performance.”

Aside from the poor refereeing, this will be another reason why Klopp wasn’t in the best of spirits after the game.

Deep into stoppage time, Diogo Jota went down with what looks to be a serious muscle problem, and was eventually stretchered off.

“I wish I wouldn’t have to talk about it,” Klopp said.

“I see there’s not a lot of contact. You can see that somebody kicks his foot and maybe then the muscle got overstretched. 96th minute, that’s not good for a muscle.

“He felt it immediately and now we have to wait and see how bad it is.”

How good were these two?

When the lineups were announced, Liverpool fans were understandably concerned about the prospect of Phil Foden going up against James Milner on the right side of the Reds’ defence.

Both he and Gomez, though, were imperious throughout.

“It’s just great for Joey that he can show what a player he is. An outstanding talent. Great player, can play different positions obviously. And today was a sensationally mature performance, together with Virgil and the two full-backs.

“Joey deserves all the praise, but I’m pretty sure before the game a lot of people thought ‘oh James Milner against Phil Foden’. The game James Milner played was absolutely unbelievable. And Joey as well, so it means the right side did pretty well.

“Our defensive line had for sure the best game it’s played this season.”