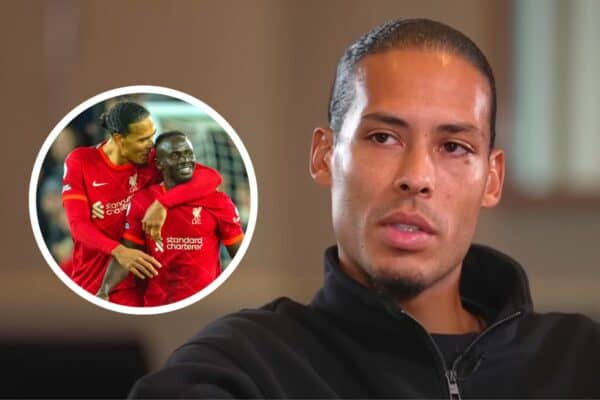 Many have suggested that Sadio Mane‘s departure to Bayern Munich is the reason why Liverpool have not performed to their usual standards this season, but Virgil van Dijk does not believe that’s the case.

This summer, after six successful years at Anfield, Mane made the decision to leave in favour of a new challenge with the Bundesliga champions.

Jurgen Klopp said the club did not want to lose the Senegalese, but knew for some time that he planned on leaving the club at the end of the 2021/22 season.

That meant they were able to plan for his exit, with the likes of Luis Diaz and Darwin Nunez both arriving at the club for big money this year.

Liverpool, though, have struggled for form since Mane’s departure, leading to the obvious theories that they are missing Mane in attack.

“That’s funny, but I don’t think it’s that personally,” Van Dijk told Sky Sports when that suggestion was put to him.

“We have players that have come in. Luis Diaz, outstanding. Darwin is getting to know how we really want to defend from the front and the importance of when we have the ball and when we don’t have the ball.

“It takes a bit of time in this case, but I don’t think that’s the exact reason why we are not performing.”

Speaking to former Reds midfielder Jamie Redknapp, Van Dijk was further pressed on why he believes the Reds have so far failed to reach the standards they have set in recent seasons.

They are already 13 points behind Man City heading into Sunday’s meeting between the two sides at Anfield, winning just two of their eight Premier League matches so far this term.

The Dutchman says “he has no idea” why Liverpool have endured such a difficult start to the campaign, but still believes they will eventually turn things around.

“It could be multiple things, but I have no idea exactly why, and there is no point for us to think about why those games didn’t go as well as we wanted.

“We want to improve it now, and in order to do that we have to work each and every day in training, and fight for each yard in the games, and try to win them.

“That’s what we try to do, and I feel and I still think that we are going to be there, because we have the quality of players.

“We’ll keep working, we’ll keep improving, and hopefully we can turn it around.”

A win against the champions would be a good place to start!