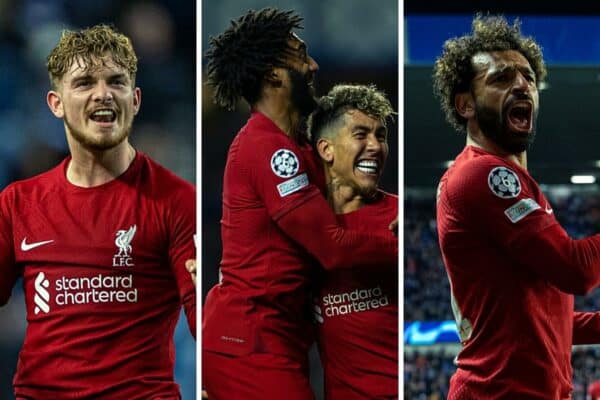 Seven goals, four different goalscorers and one valuable victory to take back to Liverpool, this evening at Rangers came at just the right time and the snapshots paint a welcome picture.

Rangers may have scored their first Champions League goal of the campaign against Liverpool, but they paid the price by doing so as the Reds showed them how it’s done seven times over.

A hat-trick for Mohamed Salah, a brace for Roberto Firmino and one apiece for Darwin Nunez and Harvey Elliott saw the final scoreboard read 7-1 in Liverpool’s favour.

From the first-half performance alone, that never felt a possibility. But it was Firmino that set the foundations, first cancelling out Scott Arfield’s opener.

And it meant we got to see his karate kick in action once more!

Another goal for the Brazilian, his eighth of the season edged Liverpool into the lead – and he had Joe Gomez to thank for the inch-perfect delivery.

Look at those celebrations, boss.

Our No. 9 wasn’t finished, laying off an assist for Nunez just seven minutes before he was handed a well-deserved rest for his efforts.

In the 17 minutes after his exit, Liverpool scored four more goals – including the fastest hat-trick in Champions League history from Salah.

It took just six minutes and 12 seconds, a haul that could not have come at a better time for the Egyptian.

And it’s fair to say he enjoyed his 22 minutes on the pitch!

It was then Elliott’s time to be in the spotlight, but he had a nervous wait to see if his effort would be given. He had his mate Mo for company, though.

And when his goal was awarded, it was a sight to behold.

A 7-1 win, it was not Liverpool’s best performance but one few can argue was not desperately needed having won just four games from the 11 previous.

We’ve hoped other victories were the turning point and that will not change with this one, and they shouldn’t be short on motivation to back it up when Man City come to town on Sunday.